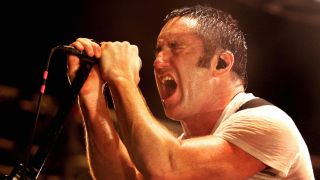 D.I.Y. since 2007, Reznor returns to the majors with his band How To Destroy Angels (Image credit: BOGDAN BOROWIAK/epa/Corbis)

Since leaving Interscope Records in 2007, former Nine Inch Nails frontman (and lately Academy Award-winning composer) Trent Reznor has worked outside the major-label system. So it comes as something of a surprise to learn that his latest project, How To Destroy Angels, will be coming our way via Columbia Records.

Along with Reznor, How To Destroy Angels includes the artist's wife, Mariqueen Maandig, along with longtime collaborators Atticus Ross and Rob Sheridan. The band released their self-titled debut EP in 2010, and their six-song, second EP, An Omen, will be issued on 13 November digitally and on vinyl.

On his Facebook page, Reznor addressed his decision to work with a major label again: "Regarding our decision to sign with Columbia, we've really spent a long time thinking about things and it makes sense for a lot of reasons, including a chance to work with our old friend Mark Williams.

"There's a much more granular and rambling answer I could give (and likely will in an interview someplace) but it really comes down to us experimenting and trying new things to see what best serves our needs. Complete independent releasing has its great points but also comes with shortcomings."

Reznor also states that videos and live dates are on the agenda for How To Destroy Angels, as well as a full-length LP next year.

How To Destroy Angels are (from left) Rob Sheridan, Atticus Ross, Reznor and Mariqueen Maandig.