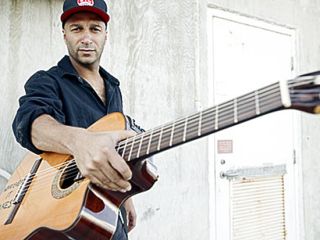 Rage Against The Machine's Tom Morello: we bet he's delighted about all this, not!

A Canadian lawyer has added controversy to the issue of music and torture. Howard Knopf, a lawyer specialising in intellectual property, suggests that the US military staff that use music to torture Iraqi prisoners at Guantánamo Bay should perhaps be paying royalties to the artists.

As MusicRadar has previously reported, there is a diverse range of artists - including Eminem, Bruce Springsteen, and Rage Against The Machine - whose music is currently being used in so-called 'soft torture' to break down prisoners' spirits.

Some artists don't mind at all. Metallica frontman James Hetfield 'joked': "If the Iraqis aren't used to freedom, then I'm glad to be part of their exposure. We've been punishing our parents, our wives, our loved ones with this music for ever. Why should the Iraqis be any different?" Others, such as David Gray, are appalled.

But now, Howard Knopf, a Canadian lawyer specialising in intellectual property, suggests that the artists could be recompensed for the use of their work in torture sessions.

"Certain collectives are quick to collect money from those in nursing homes, hospitals, prisons etc, on the basis that these are 'public' places," Knopf wrote. "Never mind that the audience is captive and it's their home, like it or not."

Knopf isn't siding with music torture. He is wryly pointing out that the rules on what constitutes a 'public performance' are these days so tight (and thus liable to royalty collection), that music torture sessions may well qualify.

In the past, ASCAP (the USA's royalty collection agency that acts for songwriters) has even tried to ensure Girl Guide groups obtain a licence for campfire singalongs of Woody Guthrie songs. We're sure Woody would have approved, oh yes.

But surely no musician would want a paycheque 'earned' by torture sessions. Or would they?