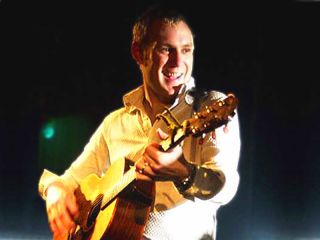 David Gray: he's not that happy in real life

David Gray has responded to earlier reports that one of his songs is reportedly being used by US interrogators in music-based torture tactics. As MusicRadar earlier reported, the UK's Musicians' Union recently called on the global federation of musician organisations to officially condemn the use of music as a tool in interrogation, what Amnesty International have termed 'psychological torture'.

One of the songs being used is Gray's international hit from 2000, Babylon. He told BBC Radio 4 programme The World Tonight

"Only the novelty aspect of this story gets it noticed... Guantanamo greatest hits. What we're talking about here is people in a darkened room, physically inhibited by handcuffs, bags over their heads and music blaring at them. That is torture. That is nothing but torture.

"It doesn't matter what the music is - it could be Tchaikovsky's finest or it could be Barney the Dinosaur. It really doesn't matter, it's going to drive you completely nuts. No-one wants to even think about it or discuss the fact that we've gone above and beyond all legal process and we're torturing people".

It is reported that music by Bruce Springsteen, Metallic, Eminem and AC/DC is also being used by US forces.