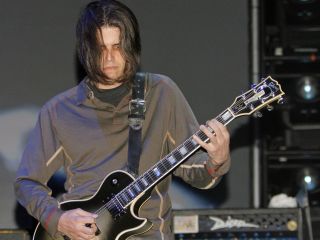 It's been eight long years of waiting for Tool fans since their last album, 2006's Ten Thousand Days, and even by the Los Angeles band's standards the process of creating the follow-up has been glacially slow. But a tantalising new Instagram photo from guitarist Adam Jones indicates that all the band are now working on new music together.

A recent posting on his adamjones_tv Instagram account with the pic below and the hashtag '#SmokeOnTheHorizon' shows Jones, drummer Danny Carey and British bassist Justin Chancellor with vocalist Maynard Keenan in what looks to be the mixing room of an undisclosed recording facility. As the Keenan's involvement with Tool recordings doesn't traditionally begin until the bulk of the instrumental music is well into being written, the shot suggests Tool are full steam ahead with the creative process for their fifth album.

The band members have previously talked of frustration at the delays that have hampered work on a new record. Specifically, an ongoing multi-level legal case. But earlier this year, Carey told Rolling Stone that the band had almost completed work on at least one new musical composition of around ten minutes in length which, "goes through lots of changes and it's got really heavy elements."

"We're always on an experimental path," Adam Jones told Metal Hammer in July on the subject of writing new music. "We never think about what worked on the last record or what's good on the radio right now. It's a selfish process, we just go in there with some riffs. We experiment and the riffs start to take a different path and over time, this riff from last week might go really well with this riff from two years ago. We piece stuff together, almost like a film soundtrack, you know?

And Jones also got specific about the band's love of using odd time signatures; "I'll tell you this - there's a lot of stuff in 7/4," he elaborated. "Breaking up 7 can sound like an even number to the listener even though it's an odd number, that's really exciting. Rosetta Stoned had some elements of that where we had a middle break and the end rhythm of 7 against 5. It kinda opens up a whole can of worms! There's some really light stuff going on but there's also a lot of heavy stuff in there too."