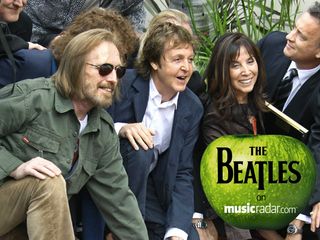 "Most magic is a trick, an illusion. But [when The Beatles played the Ed Sullivan Show], this was real. Man oh man, was it real.

"I think the whole world was watching that night. It certainly felt that way - you just knew it, sitting in your living room, that everything around you was changing. It was like going from black-and-white to color. Really.

"I remember earlier that day, in fact, a kid on a bike passed me and said, 'Hey, The Beatles are on TV tonight.' I didn't know him, he didn't know me - and I thought to myself, This means something.

"[The Beatles] came out and just flattened me. To hear them on the radio was amazing enough, but to finally see them play, it was electrifying. They did those three songs at the top of the show and then you had to wait till the end for them to come back on. It felt like an eternity, watching these comedy skits and, like, guys spinning plates - and remember, this is the biggest show on TV, but to us kids, we wanted The Beatles, so to have to watch a guy spinning plates, it was total torture.

"Plus, the girls screaming, I never seen or heard anything like that in my life. Girls were going insane, crying and waving. You just knew the TV studio was being turned upside down.

"And they couldn't even hear themselves. The producers of the show didn't want amps in the shots - if you recall, it's just the Beatles and those big arrows pointing toward them - so all the band's gear was pushed to the sides. They didn't even have monitors! I suppose it was good practice for what they were going to face playing stadiums, when they really couldn't hear themselves!

"[At school] you either had a copy of Meet The Beatles or you didn't, and if you didn't it was like something was wrong with you. Come to think of it, that was the first time anLP was a significant thing. Up till then people only bought singles. But with Meet the Beatles, that was a record you really wanted to listen to - both sides of it.

"Changed happened so fast once The Beatles hit. I went to see a band in Gainesville [Florida], and it was The Escorts, Gregg and Duane Allman's first band. They were already pretty good, but what knocked me out was their hair - it was already long! This was only a few weeks after The Beatles played.

"I was into rock and roll before them, but they were the first band I saw where everything was so self-contained. They were so young and in control of what they were doing. They were the first people we could relate to who showed us that your dreams were within your reach. That's what I found so liberating about seeing The Beatles."

"Getting to know George and actually being in a band with him, that's one of those 'pinch me' moments in life.

"You try not to think about it, and there'd be times we'd all in the room playing together, and then out of nowhere it pops into your head, 'Oh my God, I'm playing with one of The Beatles!' That's usually when I'd hit a wrong chord.

"When you think about the '60s you can't not think The Beatles. George knew he was part of history, and he was pretty cool about it, as cool as a person could be, I imagine. I would ask him questions about what it was like, Shea Stadium, the Maharisi, Sgt Pepper - how could I not?

"The thing that surprised me, when I asked him about playing The Ed Sullivan Show, was how nervous he said they all were. 'Seventy-three million people,' he said. 'That's a pretty big gig.'

"I know I might sound jaded, but I don't think anything could ever grab us in quite the same way. Plus, they were really, really great."

Tom Petty & The Heartbreakers' newest release, The Live Anthology, will be issued on 10 November.