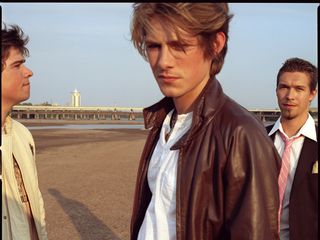 The term 'supergroup' is often thrown around rather loosely, to say the least. Tinted Windows is the latest band to attract the moniker, and it probably does deserve it. Regardless of its eyebrow-raising linup…

It's easy to dismiss the 90's version of the Jonas Brothers as blonde one hit (hello, MMMBop) wonders. But, actually… Ok, let's just go back to Tinted Windows, shall we?

It's likely that Iha and Schlesinger got the band together because they co-own Scratchie Records and New York's Stratosphere Sound Studios. Where, probably not coincidentally, the quartet recorded their debut album, which they'll showcase at SXSW Festival and release in April.