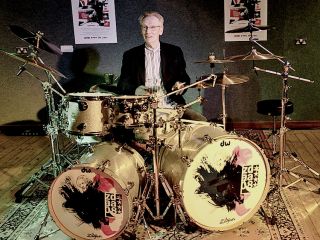 The band returned to the stage in 2005 for the first time in 12 years for shows in London and New York, but the drummer reveals those shows will be their last.

Baker was being interviewed exclusively for Rhythm magazine by Razorlight drummer Andy Burrows, who asked the Cream sticksman whether the 2005 shows had lived up to his expectations.

"Very much so. The Albert Hall was great but not the shows we did at Madison Square Garden in New York later that year. That was a fucking disaster."

When probed as to why Baker revealed:

"I'd refused to do it first of all. It was Eric who phoned me up and convinced me. The reason I didn't want to do it was because of what happened in New York in 1968 when the magic was destroyed. The reason why we broke up in the first place re-emerged on stage at Madison Square.

"You'll notice I'm talking about Eric in a nice way, but there was another person in the group. It wasn't just a problem with the volume of the bass guitar, it was the problem of being humiliated in front of 20,000 people.

"Jack Bruce has apologised many times since, but he's been doing that to me ever since I first played with him. He gets tearful and says 'I love you man' but the volume thing has damaged my hearing to this day. I just cannot play with other people playing too loud on stage. It's too painful."

Finally Baker was asked if we will see another Cream reformation. "No, we won't," he replied.

The good news for Cream fans, however, is that Baker and Bruce will be performing together next month at the Zildjian Drummers Achievement Awards, taking place at London's Shepherds Bush Empire on 7 December. Baker will be honoured at the event, which will also feature performances from some of the world's greatest drummers, among them Simon Phillips, Steve White, Keith Carlock, Gary Husband and Tony Allen.