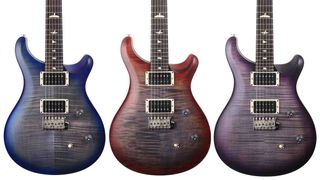 PRS is capitalising on the success of the revived and well-reviewed CE 24 with a new CE Satin Nitro model.

PRS's coil-splittable 85/15 humbuckers are also onboard, as are the company's Phase II machineheads and tremolo/vibrato system.

Feeling 'bursty? Just 150 of these beauties will be available in Europe, Japan and Australia, weighing in at £1,999 / €2,349, including a PRS premium gigbag.