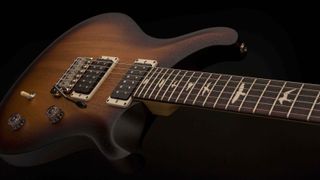 Earlier this year, PRS revived its bolt-on electric, the CE 24, to rave reviews. Now, the company has ushered in a Standard Satin model, for a limited time only.

The CE 24 SS finishes the platform's mahogany body and bolt-on maple neck with a thin layer of satin nitro, as well as PRS 85/15 pickups, which promise "remarkable clarity".

A Pattern Thin maple neck is fused to a 25" East Indian rosewood fingerboard (with, yes, PRS bird inlays), as well as locking tuners and vibrato.

Three finishes are available - Charcoal, McCarty Tobacco Sunburst and Vintage Cherry - at a price of £1,650/€1,979.

As we said earlier, this is a limited-edition model, and PRS is only taking orders up until 31 October, so best act fast.