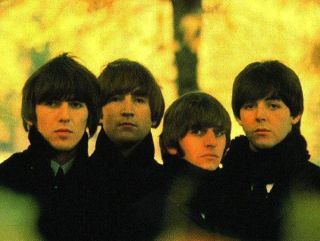 The Beatles get uked

Every musician has probably busked, covered or scratched/mashed-up a Beatles song at some point in their lives. But has anyone covered The Beatles whole catalogue like this?

The project will release one song a week, and will thus take over three years to complete. The duo hope to have the full set of Fabs songs ready to play at the opening ceremony of the London Olympics, in 2012.

Here's this week's track, Here There And Everywhere.

"I got the idea a few years ago when I uploaded every original Beatles song into iTunes. I saw that the Beatles playlist was only 9.4 hours long. I realised that it would be possible to perform all 185 tunes in one day.

"You may have heard of the Unfortunate Jihad Incident of 2001 in New York City. It really rattled me. I picked up the ukulele right after, and it proved immensely therapeutic. The Aloha/Zen feeling you get playing the little treasure is transporting.

"Since then the ukulele has become my primary instrument. I've played it on record with Rufus Wainwright, Antony Hegarty, Albert Hammond Jr and loads others.

"So I decided to play The Beatles Complete (songbook) in one day on the uke. This led to the Roger and Dave project For The Benefit Of Mr Buffett.

"We did the gig as a charity concert, and decided to give all the proceeds to Warren Buffett, the richest man in the world.

"Warren's son Peter heard about the show, thought it was hilarious, and performed You Never Give Me Your Money live with us, at Spike Hill in Brooklyn, 7 December 2008 - Dead Lennon Day's Eve.

"The new, current project is a logical extension of the initial concept. Might as well record them all now that we've learned them."

And do you already know how to play every Beatles' song?

"Yes, I knew every Beatles song already. As a thinker and a writer I have long been making the case that The Beatles oeuvre is absolutely on par with the 37 plays (of Shakespeare) or any other body of creative work you want to compare it to. Except that far more people have heard, enjoyed, and been influenced by The Beatles in the last 40 years than have read or seen Shakespeare in the last 400.

"The plan is for the 185 accompanying essays on every song to become a book."

Have you been in contact with anyone close to the surviving Beatles?

"We have not been in touch with anyone close to The Beatles yet. Sean Lennon is in our social circle, and we hope to get him to do a track. That will probably make Yoko slightly less likely to sue us or have us shot.

"In all seriousness, we will contact them soon, and fully expect their blessing as long as The Beatles/Apple are OK with the ukulele-based charities we contribute to (such as Girls Inc in Omaha, Nebraska). If Warren Buffett doesn't mind supporting us, we can't see why the much poorer Beatles won't either."

"The Beatles are a very uke-centric organization. Lennon's mother Julia played uke, John started out playing on uke, and all of his non-piano songs sound fantastic and are easy to play on ukulele.

"George Harrison became devoted to uke later in his life: when he flew he would bring two ukes as his carry-on baggage, in case he met someone who he could play along with on the flight. Paul McCartney now plays Something on uke live as his tribute to George.

"But, finally, the whole enterprise is silly in the extreme. Investors in Monty Python are unlikely to suffer from a Sense Of Humour Failure."

MusicRadar is smiling already. Meanwhile, Greenawalt and Barratt are already anticipating the eventual release of The Beatles' long-hidden rarity, Carnival Of Light. Paul McCartney reckons it might be out in 2009. Greenawalt is ready:

"Dave has already produced a fantastic version of Revolution 9, that I have added uke to. I can't believe Carnival Of Light is any more difficult or abstract than that? Do you know where we get a copy…. somebody must have it?"

Anyone out there want to get involved? Visit the blog.

Though it could be hard to beat the current uke Queen, Julia Nunes.