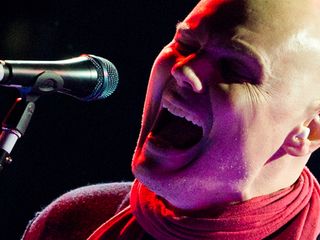 The Smashing Pumpkins' highly anticipated Oceania, their first stand-alone album since 2007's Zeitgeist, and one which originated as part of the massive concept project Teargarden By Kaleidyscope, will be released on 19 June through EMI (in all territories except Canada, Brazil and Australia).

Beginning in 2009, the Pumpkins - frontman Billy Corgan, bassist Nicole Fiorentino, guitarist Jeff Schroeder and drummer Mike Byrne - started slowly revealing the 44-song Teargarden set, releasing a song at a time with a plan to issue 11 four-song EPs. In early 2011, however, Corgan decided to focus on a batch of songs that became the "album within an album" Oceania.

I'm looking forward to making one cohesive statement," Corgan told MusicRadar last April, "the idea that you can say something bigger with a group of songs. And if it pushes me harder to write better music, and people only end up listening to the three best songs, I can live with that. In the past that would have really pissed me off."

We spoke with Corgan again last October, after he and the band had finished recording Oceania, and he was positively ebullient: "The good news is that the response to the new music is overwhelmingly positive," he said.