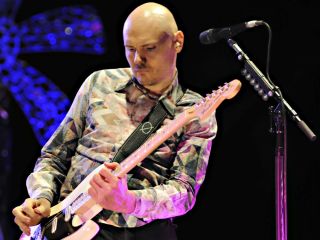 Billy Corgan lists new song titles...but don't get too set on them

The Smashing Pumpkins' frontman Billy Corgan, who at one time declared albums a "dead" medium, has tweeted the tracklisting of the upcoming Oceania, the "album within an album," a disc that will be released separately from the ongoing, 44-song Teargarden By Kaleidyscope but is still considered part of the whole.

According to Corgan, the songs on Oceania are as follows:

Check out this clip (below) of My Love Is Winter, performed live last year, which features some blistering guitar work by Corgan and co-six-stringer Jeff Schroeder.

And then there's Quasar (below), which was played only a few times for small groups of fans invited to see the band soundcheck on the first leg of their 2010 American tour, hence the lo-fi recording.

Oh, and don't get too set on the tracklisting. Corgan followed his initial tweet with another message: WPC steps to podium//clears throat//"Ladies and Gentleman, please take note that all titles are subject to change"...