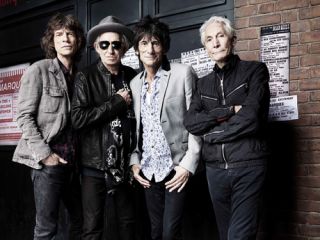 Mick Jagger, Keith Richards, Ronnie Wood and Charlie Watts at the Marquee Club, London, where it all began 50 years ago. © Rankin

Most marriages don't last 10 years, so the thought of a rock band making it to 50 years is downright unthinkable. But The Rolling Stones aren't just any band. They're the Greatest Rock 'N' Roll Band In The World, and as of tomorrow (12 July) they're half a century old.

To mark the occasion of their first gig as The Rolling Stones, Mick Jagger, Keith Richards, Charlie Watts and Ronnie Wood returned to the Marquee Club in London, the site of the band's official debut on 12 July 1962.

Actually, they were called The Rollin' Stones that night, lifted from a song by their hero, Muddy Waters, and their lineup consisted of Jagger, Richards (then going by his given name "Richard"), guitarist Brian Jones, pianist Ian Stewart, Dick Taylor on bass and Tony Chapman on drums. Bassist Bill Wyman joined in December of 1962 and Charlie Watts signed on in January 1963.

Tomorrow, the band will attend a career-retrospective photo exhibit at the Somerset House in London. The photos will appear in the upcoming book Rolling Stones: 50, which will be released later this year.