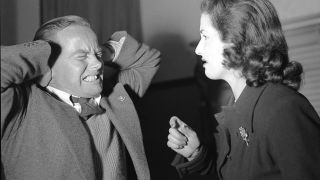 How many of the biggest pop songs of all time are love songs? The vast majority. Throughout history, music and love have always gone hand in hand. Whether as an outlet for those innermost sexual desires when words alone won't suffice, or as a lovelorn expression of heartbreak, there is no more eloquent way to say 'I love you' than to do so in song.

This Valentine's Day, MusicRadar names and shames a few of the worst offenders...

Maybe it's the copious amounts of chest hair on display, maybe it's the tight white trousers, who knows? But for whatever reason, if there's one thing we don't feel like doing after watching Paul Rodgers and co. thrust their way through their 1975 hit it's that. Feel like having a rigorous shower would perhaps be more apt.

Any song from last year's LP1 could be in contention here but there's something particularly dire about the One Directionite's tale of a night with a bisexual woman and unnamed third party. We'll just leave you with the lyrics as Exhibit A, your honour…

"My girl, she like it both ways
she like the way it all taste
Couple more, we'll call it foreplay
No, no, I don't discriminate
Bring it back to my place

"Lovin' the way that she's turning you on
Switching the lanes like a Bugatti Sport
Nothing but luck that she got me involved, yeah
Flipping that body, go head, I go tails
Sharing that body like it's our last meal
One and a two and a three, that's for real

"She said, "We're young and we're stupid"
She said, "Come on, boy let's do this"
Make every day my birthday
Let's celebrate, like oh my gosh
She do things you won't believe"

Obviously here at MusicRadar we're a broad church without a hint of body fascism, so we have absolutely no problem with Sir Mix A Lot's decision to celebrate his love for larger behinds.

However, there are few things in the world less sexy than a man using a crude snake analogy to refer to the opinions of his genitals.

You just know from the title this is probably going to get unsexy fast. But how fast?

FAO Fergie from the Black Eyed Peas: Humps is a word synonymous with camels, and 'lady lumps' sounds like something you'd throw into an awkward conversation with a young child curious about the birds and the bees.

If Alan Partridge made R&B, it would sound like this.

6. Another Level - Freak Me

Another Level's 1998 UK number one single was excruciatingly ubiquitous back in the day.

Seemingly penned by an unimaginative sixth former in a one-handed sexting frenzy, if the lyrics aren't enough to make you feel too queasy to stomach that lovingly prepared romantic dinner - "I love the taste of whipped cream / spread it on top of me" - then there's always the thought of that Dane Bowers and Katie Price sex tape. Bleurgh.

7. Nickelback - Figured You Out

FAO Chad Kroeger: Please, for the love of God, never try to do 'sexy' again. And just in case you were thinking about it, stay the hell away from irony while you're at it.

From the opening line, "I like your pants around your feet", to the staggering "I like the white stains on your dress", Figured You Out is bellowed with all the poise and finesse of a wookie undergoing a rectal examination. We're not talking smooth-talking sophistication here, or even a job at a greetings card company.

Meat Loaf looks like a fairly open minded man, a fact that only fuels our speculation that whatever it is he blankly refuses to do for the sake of love must involve some fairly horrific and invasive act upon his person.

Tonight MusicRadar will be sitting at home alone with a bottle of wine indiscriminately texting the words I Wanna Sex You Up to every woman in our address book. This is why we're alone.

Anyone who has read Anthony Kiedis's autobiography, Scar Tissue, can attest to the fact that the Red Hot Chili Peppers frontman has what might be referred to as a way with the ladies. However, on this evidence it beggars belief that he managed it. This is just downright unpleasant.

Hopefully we can all agree on the fact that there is no bigger turn-off in the world than novelty sex funk. This is certainly not one for the first date...

Now just to redress the balance...