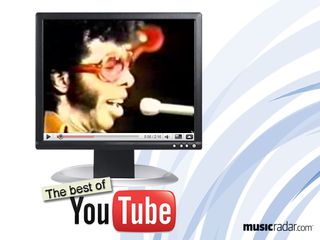 Sly And The Family Stone

Today is the Vernal Equinox, which marks (in the Northern Hemisphere at least) the beginning of spring - so this week we've prepared a collection of clips to help you get into the spring spirit.

Entries this week include George Harrison, Sly And The Family Stone, Yo La Tengo and Belle And Sebastian - a sunny line-up if ever we've seen one. Enjoy!

Terry Jacks - Seasons In The Sun

Now that spring is in the air, what better time to remind ourselves of this misery-infused, key change-riddled dying farewell. Check out the Nirvana version, recorded in Brazil in 1993 complete with comedy lyrical ad libs and Kurt Cobain on drums. Chris Vinnicombe

Is this the ultimate spring song? Could be. This performance, from the Concert for Bangledesh, is a classic. Revel in the sound of two capoed acoustics, as played by Harrison and Badfinger's Pete Ham. When Harrison picks the opening chords, the crowd goes crazy - prompting the nervous-looking ex-Beatle to crack a smile. Joe Bosso

Sly And The Family Stone - Hot Fun In The Summertime

It's not exactly summer yet, but Sly Stone's exceptional muttons chops - and some craaazy dancing - need to get out in the air ASAP. What a mad, brilliant band they were. Michael Leonard

Yo La Tengo and Redd Kross - Who Loves The Sun?

Every Hanukkah, Yo La Tengo play a series of hometown shows at Maxwell's in Hoboken, NJ where they do requests, oldies and covers. Alcohol is possibly involved (watch this massacre) but sometimes, it all clicks - to whit, this Redd Kross-starring stab at the Velvet Underground's happiest song from Loaded. Long-term Yo La fans will know the band played the Velvets in indie film I Shot Andy Warhol. Non Yo La fans can just smile. Mike Goldsmith

Belle And Sebastian - Another Sunny Day (live at Lowlands)

When I went to Lowlands Festival five years ago, it was muddy, full of heavy-metal-loving Dutch teenagers and not particularly spring-like. So I can imagine Belle And Sebastian's twee, indie-plinkety pop went down a treat a few years later! Annoyingly brilliant… Tom Porter

You Are The Sunshine Of My Life, the opening track from his 1972 Talking Book album has become one of Mr Wonder's great standards - this clip comes from a 1974 performance in London. It's enough to brighten up even the darkest day. Ben Rogerson

We're all familiar with various old computer gear being employed to cover Radiohead songs - but we've never before seen it done with classical music. So here's a rendition of Vivaldi's baroque masterpiece Spring, played solo by an old scanner. Chris Wickett