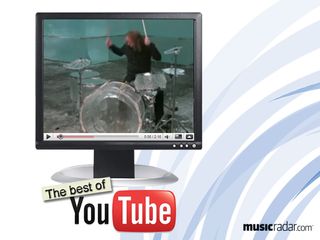 This week, check out drums made of ice, LED-fretboard slap-bass antics (the playing's pretty good, too!) and the world's largest, er, organ... Enjoy!

Guys covering The Beatles, who hasn't seen that before? Well, you've never seen anything like the Virtual Beatles. Singer Frenchytouch lives in France, drummer MG4150 in New Mexico and guitarist June 626 in Japan. They record their parts separately, send them to one another, edit them together and viola! - a 'virtual' band. While their clips are great for groups wishing to learn how to play Beatles songs fast, the really amazing thing is this: the Virtual Beatles have yet to meet! Joe Bosso

The Macy's store in Philadelphia boasts the world's largest playable pipe organ - which, you'd think, probably makes it the world's largest instrument, too. (Actually, David Byrne and his playable house might have something to say about that.) Every Christmas, thousands of shoppers flock to the store to hear the magnificent organ in action, all of them wondering what sound could possibly be more relaxing during the stressful, last-minute Christmas shopping period. Check it out here - and don't miss the fancy pedal footwork at 1:37. Chris Wickett

The Specials - A Message To You Rudy live on Jools Holland

Despite founding member Jerry Dammers 'slamming' the reunion (chiefly because he wasn't invited), The Specials went ahead and did it anyway. Here they are on Jools Holland warming up for the festival season. Tom Porter

The King of thumb bass

I'm not a big fan of slap-bass outside of 'proper' old-school funk. Yet Level 42 veteran Mark King has silly skills. If only we all had this command over our chosen instrument? Michael Leonard

I'd never heard of Tim and Eric before someone sent me a link to this clip, but I'll say this for them: they know how to parody old-school computer music making. In fact, it took me a while to work out that this isn't actually the real deal. Ben Rogerson

Incredibly, June sees the anniversary of two decades passing since Nirvana's 1989 Sub Pop debut LP Bleach. Here's a ferocious rip through Bleach track School taken from the band's 1992 headline set at the Reading Festival in the UK. If you were there, count yourself very lucky indeed. Chris Vinnicombe

For the full story behind this (basically, it's an ad for the Icehotel Jukkasjärvi in Sweden) head here but to cut a long story short - Matz 'Robban' Eriksson is the drummer from recently-defunct Swedish garage heroes the Hellacopters. This is a video of him in an ice box playing ice drums and hitting the hell out of ice cymbals. It looks insanely brilliant and it is impossible to write about without using the word 'cool'. For more, check this Making Of. Cool. Ah. Mike Goldsmith