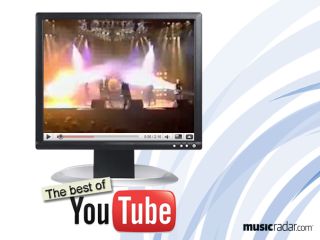 The KLF and Extreme Noise Terror terrorise the audience in '92

This week, we're running another special - this time it's the Brit Awards in anticipation of Wednesday's ceremony.

We've got everything here, from clips of classic controversies to brilliant music from the nominees. Enjoy the show...

Will Beck be a winner or a…

Beck's Danger Mouse-produced album Modern Guilt somehow managed to feel like less than the sum of its talented parts (maybe its creators fitted together just a little too well?), but he's still managed to scoop a Best International Male nomination. I doubt he'll take the prize, though, so an airing of this live version of breakthrough hit Loser seems entirely appropriate. Ben Rogerson

The Last Shadow Puppets - My Mistakes Were Made For You

When Adele and Duffy start winning everything (again), you could do a lot worse than getting behind The Last Shadow Puppets for Best British Breakthrough Act. Of course, My Mistakes Were Made For You should be up for Best British Single. Pipped to the shortlist by Scouting For Girls? Harsh. Tom Porter

Seattle's Fleet Foxes are an unlikely success story and a waaay-outside bet for Best International Group and Album at the 2009 Brits, but their 'proper' playing and old folk-rock sounds surprisingly 'new' these days. Note to lead singer: can Dave Grohl have his teeth back? Michael Leonard

Diamond's up for Best International Male and he should take it.This clip is a lip-sync (or post lip-sync, whatever), but who cares? It's 1966 TV and you did what you were told back then. Fact is, when you write a song this deep, this close to the bone and this memorable, you don't have to do anything else. You've made your mark. Joe Bosso

Of course, we couldn't run a Best of YouTube special on the Brits without including at least one clip (OK then, two clips - see Mike G's entry below) of a past Brit Awards show controversy. Here's one of my favourites: dance DJ Brandon Block exchanging a few words with Ronnie Wood. It's a worthwhile watch - if only to see security running about like headless chickens. Chris Wickett

The KLF vs Extreme Noise Terror - 3am Eternal

A joint venture with a Suffolk grindcore outfit, a bonkers Bill Drummond in a kilt/crutch combo, enough strobes to send the viewing public into meltdown and, just to cap it off, the emptying of a machine gun above the baying audience's heads. True, the gun was only firing blanks but when combined with the later dumping of a dead sheep at the aftershow party, here was the subtle announcement that The KLF really had left the music business. We remain the poorer for it. Mike Goldsmith