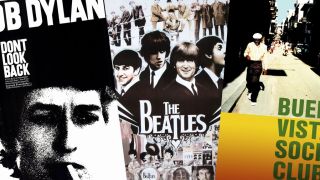 Some may tell you otherwise, but for us, it's never just about the music. It's about the process: the blood, sweat and (most likely) beers that went into an album, a gig or an entire career.

Below, you'll find our pick of the pop docs - hours upon hours of dark pasts, fraught band-member conflicts and geniuses at work. So, join us as we take you behind the music…

There is only one band that justifies an eight-part documentary, and that band is The Beatles. The Anthology aired on British TV in 1995 to huge viewing figures, and spawned three double-albums and a pair of new(ish) singles.

As a film, it's endlessly watchable, populated as it is with some of the greatest musical performances ever captured on tape. If only John had been around to take part…

Do you want to know what it takes to be a megastar? Because you will find out in Spike Lee's peerless Jacko documentary.

The insight into the recording sessions of Bad is fascinating for any music maker, and the sheer level of creativity - and hard work - coming out of Michael Jackson in the late '80s is something to behold.

3. Anvil! The Story Of Anvil

The Story Of Anvil is the story of every band that didn't quite make it - which is almost all of them.

Yes, it's hilarious to see a couple of middle aged blokes still banging the hair-metal drum, but Anvil is about much more than that. Friendship, dedication and the dream: it's all here, in all its tarnished glory.

4. The Devil And Daniel Johnston

Many a musician has wrestled with mental health issues, but few have gone through the hell that Daniel Johnston endures over the course of this film. It charts the decline of the sweet, Beatles-obsessed cult hero into the depths of mental illness in the most unflinching of terms.

It's a tough watch at times, but well worth putting yourself through.

If you were going to follow Bob Dylan around with a camera, you couldn't have chosen a better time than his '65 tour of the UK.

Legendary film maker DA Pennebaker caught much of Dylan's mid-60s pomp, and here we see a young Bob playing future classics in hotel rooms, ruffling journalistic feathers and generally being a mercurial genius and looking impossibly cool while he does it. Unmissable.

6. Some Kind Of Monster

Sometimes it's when things go wrong that real greatness reveals itself. And so it goes with Some Kind Of Monster, a documentary that was supposed to be a straight up making-of for Metallica's 2003 album St. Anger, and instead captured a band at breaking point.

With its unforgettable scenes of group therapy sessions, it's a fascinating insight into the fractured dynamic of one of the world's biggest bands.

Dave 'the nicest man in music™' Grohl is both the producer and the presenter of this love letter to one of LA's legendary recording spots, and it positively gushes with that patented Big Dave charm.

The story of the studio's Neve board is central to proceedings, and Grohl's infectious enthusiasm is so all-encompassing that even your non-muso partner will enjoy themselves.

Ah, to be young, on drugs, and convinced of your own genius. Dig follows the career trajectories of two early 00s indie bands: The Brian Jonestown Massacre, led by unhinged frontman Anton Newcombe, and The Dandy Warhols, best known for most hipsterish of hits Bohemian Like You.

Frankly, a must watch for every aspiring young indie kid with tight trousers and a haircut.

Is Ginger Baker mad, a genius, or simply an arsehole? The answer, as presented here, is all of the above.

There's no denying the ex-Cream sticksman's talent, but Beware Mr Baker shows him to be a gold-plated nightmare to be around. Drugs, drums and danger abound in this riveting depiction of one of rock's true nutjobs.

10. Westway To The World

Put together by longtime Clash associate (and Big Audio Dynamite member) Don Letts, Westway To The World is a breathless, speed-fuelled portrayal of the rise and fall of the biggest band to come out of punk.

Notable for its excellent access to the band, Joe Strummer's genial genius is a highlight, as is some barnstorming footage of West London's finest at their blistering best.

As the first portrait of Kurt Cobain on film to have the cooperation of his family (cheers, Courtney!), Montage Of Heck is basically unmissable for any self-respecting Nirvana fan.

Unheard songs and unseen footage are wonderfully woven together in a film that manages to transform Kurt the legend into Kurt the man.

It feels like news of Amy Winehouse's death only broke the day before yesterday. As a result, Amy is full of raw emotion as it attempts to puzzle through the singer's problems with drug addiction and celebrity.

Hard-hitting and tragic, it's nevertheless threaded through with evidence of a monumental talent that was lost too soon.

After a failed attempt at a solo career, singer-songwriter Sixto Rodriguez drifted into obscurity, much like a million other musicians. Little did he know that in South Africa he was a cult hero of the very first rank, and the stuff of morbid legend.

Searching For Sugar Man is a story so unlikely it had to be true, and it's all the more brilliant for it.

Pub-rock was the precursor to punk, and Dr Feelgood were the key players. The demented Telecaster thrashings of the ever-brilliant Wilco Johnson, Lee Brilleaux's commanding presence, and the reality of mid-70s Canvey Island are all brilliantly chronicled in this must-see Julien Temple documentary.

Held together by the charisma of the Gallagher brothers, Live Forever charts the rise and fall of Britpop, the coke-fuelled rock 'n' roll party that nobody thought would ever end, until it did.

All the key players are here, from Jarvis Cocker and Damon Albarn to Damien Hirst and, er, Louise Wener from Sleeper. Great records, great bands, and some phenomenal class-A anecdotes.

The story of an unassuming Liverpool lass who became the secretary of the biggest band in the world, Good Ol' Freda will restore your faith in humanity.

Freda is a beautiful, warm human being who never cashed in on her amazing story. Essential for Beatles fans, and a fascinating insight into life behind the scenes of Beatlemania.

17. Something From Nothing: The Art Of Rap

Everyone you want to hear talking about rap appears in this film. Dr Dre, Snoop Dogg, Kanye West, Eminem - it's a roll call of the biggest and the best, talking about the philosophy and technique behind the bars.

Directed by Ice-T, Something From Nothing is keystone viewing, a must-watch piece of the hip-hop curriculum.

18. Standing In The Shadows Of Motown

If you've ever listened to Motown, then you've heard the Funk Brothers. Standing In The Shadows Of Motown is the story of the biggest band you've never heard of, and although parts of this film are a bit on the cheesy side, it's worth it for the James Jamerson anecdotes alone.

You probably own the album, but have you seen the film? Because you really should.

Jack White! The Edge! Jimmy Page! This is a documentary precision-engineered to get guitarists hot under the collar. It knows what you want, you filthy buggers: Jimmy Page explaining Kashmir; the lowdown on the Edge's pedalboard; Jack White being all retro and stuff - and it delivers.

Essential for six-stringers of every stripe.

Music in the movies: the top 20 moments

Whiplash and the 15 best drum movies

The 25 best acoustic songs of all time