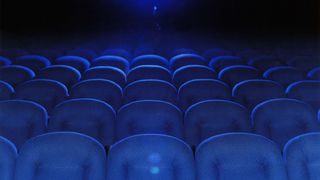 Ah, Hollywood! If there's somewhere that understands the music industry's fondness for producing entertainment for the masses while high on a cocktail of arrogance and medical-grade pharmaceuticals, it's the place where movie magic happens.

Over the years, the talkies have given us a plethora of musical moments to stir the soul and gird the loins, and here, lovingly curated by MusicRadar's in-house movie-monkey, are 20 of the very best. Are you sitting comfortably? Then we'll begin...

You could populate this entire list by simply chopping Spinal Tap into twenty pieces and leaving it at that. But if we had to choose a favourite scene - and we do - it has to be this.

The perfect delivery system for the best gag in the film, and a lovely bit of piano to boot.

Every guitarist in the world, even you, reading this right now, has a guitar they want but can't afford. You know the specs, you've tried it a million times, and, barring a lottery win or the sale of a kidney, you will never afford it. Wayne understood, and he felt your pain.

3. "There's no action on this keyboard."

First thing's first: at the beginning of this clip, Ray Charles shoots at a child. Strong start. Then big Ray goes on to perfectly take off every know-it-all music shop employee in the universe, right up to being able to play better than mere mortals ever could. First class.

In a dream scenario that every musician wishes for (but will never happen), Marty McFly steps up, counts in the band and blasts out a bit of Chuck Berry to a temporally confused crowd.

This scene made us want big red Gibsons, although we still wince when we think of that amp going over. Foolish time-travelling boy.

Anybody who has played a crappy club, mid-week, to a handful of disinterested drunks, will instantly recognise the mixture of bravado and exasperation John Lennon exhibits here.

Backbeat, incidentally, is a superb portrait of The Beatles' wild Hamburg days, so, you know, go and watch it.

6. The Dude writes one

Most times, songwriting looks easy on the big screen. But it's not. Otherwise every bugger would be at it. There's a lot of sitting about, some fairly aimless strumming, plenty of staring into space and then, eventually, there's a song - which is exactly what happens in Crazy Heart.

You can't see it in the trailer below, but trust us, it's in there.

What do you do when your band is drunk? Send 'em home and record the parts yourself, of course. At least, you do if you're Ray Charles.

Rarely has an eight-track been used as a plot point, but that's what we get here, and isn't it bloody marvellous?

8. "A slovenly looking young man with the voice of an angel."

The moment the wannabe soul band stumble across lead singer Deco, smashed out of his gourd at a wedding and absolutely nailing The Proclaimers, is an unforgettable highlight.

Hollywood has done a good job of portraying studios as holy spaces where beautiful people make perfect noise. The reality is this: swearing, smoking, mistakes and at least one certifiable maniac, as band and producer drive each other to distraction while worrying about how much the whole thing is costing.

If this film is the rap Rocky (which it is), then this is the final punch of the last round, when Rocky's trash talking opponent gets KTFO.

Eminem is surprisingly decent in 8 Mile, and this is the moment the whole movie builds towards, tying up all every narrative thread in a sweary rap-package.

Probably not the best musical performance in the film (that would have to go to the really quite sad Shoals Of Herring), this is nevertheless the most cutting.

A struggling artist pours his heart into a song, only to be cruelly rejected for its lack of commercial appeal. Suits. What a bunch of bastards.

After being given a harsh lesson in the reality of the music industry, Joaquin Phoenix drops Folsom City Blues like it ain't no thing, becoming Johnny Cash in front of our eyes.

After a tentative start, the legendary Tennessee Two rhythm kicks in, and Hollywood makes us believe for a second that a band could walk into an audition, knock out an unrehearsed song and end up superstars.

This scene is so ferociously unjust that it kind of makes Straight Outta Compton. More about the motivation behind the music than the actual music itself, it's nevertheless a moment that the whole movie pivots on. Plus, it features a truly breathtaking hawaiian shirt, so double thumbs-up.

Drummers are a strange breed. That's very much a given. But they are also the member of the band that dictates the pace of any given song, which gives our four-to-the-floor brothers all the power.

This moment in That Thing You Do catches what happens when drummers get it right. Oh, it's cheesy as balls, but dammit, we can't help ourselves from enjoying it…

Learning an instrument is, annoyingly, quite hard. It takes time and perseverance and all that shiz.

So it can be heartening to remember that even the greats were crap to begin with - as showcased in this scene from Lennon biopic Nowhere Boy, in which our hero struggles manfully with the banjo as life goes on around him.

16. Vai versus The Karate Kid

Imagine, if you will, the climax of The Karate Kid (original, not remake - we're not savages) but with guitars. There's a load of old toot involving souls and the devil before this none-more-80s climax, but ultimately, it comes down to Steve Vai and Ralph Maccio sweep-picking rather than sweeping legs.

Is this a thinly veiled excuse to crowbar one of Robin Williams' greatest performances into this list? Sort of.

But it's also one of those moments where the power of a great record is deployed with devastating effect, as Martha Reeves and the Vandellas somehow make the Vietnam War bearable.

If Bill Murray being hilarious and Wes Anderson being more Wes Anderson than even he thought possible aren't enough to make you watch The Life Aquatic, perhaps this will be.

Seu Jorge, Brazilian superstar, playing Bowie songs in Portuguese. They pop up throughout the movie, but Changes is an absolute peach.

In a movie primarily about the all-consuming power of Rawk, there is no better moment than Jack Black unleashing the potential of his mini-band's lead guitarist by baiting him into writing an angry song.

We've all talked about practicing until our hands/fingers/brains bleed, but actually doing it? That takes a level of dedication bordering on madness, which is exactly the thrust of jazz drum-a-thon Whiplash.

JK Simmons' masochistic treatment of Miles Teller in this drum-off scene is the stuff of nightmares. Is jazz worth it? No. The answer is no.