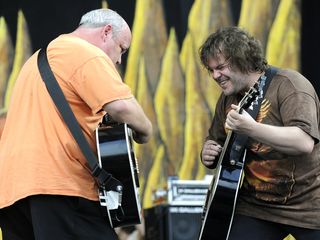 Ahead of the 15 May release of their new album Rize Of The Fenix, that irrepressible duo of Jack Black and Kyle Gass - better known as Tenacious D - have issued a hilarious promo clip in which Doctor Bill Teetz (Bob Odenkirk) of the Tinnitus Institute and bassist Rudy Sarzo (Quiet Riot, Ozzy Osbourne) attempt to study the effects 'super painful extreme tinnitus.'

As you might imagine, cranking Rize Of The Fenix is key to Doctor Teetz's research.

"This is for real," Odenkirk told Rolling Stone. "When Jack gave me an early version of Rize Of The Fenix, I couldn't stop blasting it. I couldn't play it loud enough or often enough, and every night for a week, I went to bed with the sweet sounds of tinnitus ringing merrily in my ears, and yet, the next day I couldn't help cranking it again. I don't know if there is a Tinnitus Institute or not, but I predict there will be. Blame it on Rize."

Several weeks ago, Tenacious D released a star-packed video to their song To Be The Best. Check it out below.