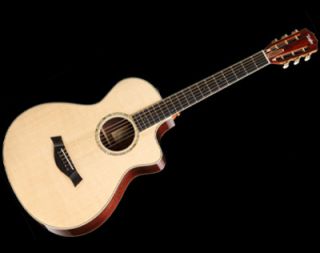 PRESS RELEASE: Taylor Guitars is proud to debut an inspiring new acoustic voice, the 12-Fret, as one of several new Specialty guitars in the company's 2010 line-up.

Named for the point where the neck meets the guitar's body, the 12-Fret revives an acoustic design concept from yesteryear, refining it with signature Taylor craftsmanship to deliver a sweet, warm, vintage sound with a surprisingly robust voice.

The 12-Fret was inspired by Taylor's 35th anniversary in late 2009, when the company built a series of commemorative guitars in ultra-limited quantities, including a 12-fret Grand Concert model. The guitar's unique sound instantly captivated Bob Taylor and other players, prompting the design of a rosewood/spruce 12-fret model for the 2010 line. "I've fallen in love with it," raves Bob. "It's that pure and wonderful. What gets me is its tone coupled with its large voice, all in a small, lightweight package."

The appealing tonal properties are the result of Taylor's advanced design engineering. As the neck meets the body at the 12th fret instead of the 14th, the altered geometry of the neck, body and bridge in relation to each other creates a sweet spot of sound - deep and warm on the low end, with crisp, articulate trebles and an impressive overall volume. The "modern vintage" tone gives the 12-Fret the voice of an aged guitar right out of the case.

The Grand Concert body features a back and sides of beautiful Indian rosewood and is complemented by a creamy Sitka spruce top, and a cutaway that allows access to the upper register. Premium appointments include Ivoroid binding, an abalone rosette with an Ivoroid-bound soundhole, and abalone-dotted ebony bridge pins.

The mahogany neck features a 24 7/8-inch scale length topped with a slotted peghead and crowned with Indian rosewood. On the inside, the guitar's voicing is enhanced by a special 12-Fret bracing pattern andTaylor's Expression System pickup to naturally amplify the guitar's rich tonal nuances.

The 12-Fret guitar joins the Baritone 8 and 6-String models, announced earlier this year, as part of the company's series of Specialty guitars. The new guitar will be offered at a suggested retail price of $3,898 and will be available at both domestic and international dealers in late spring.

For more information about the new 12-Fret from Taylor, click here.