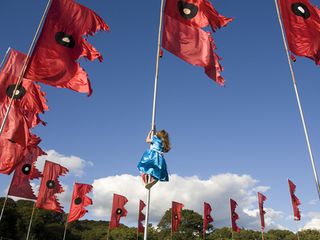 Lord Of The Flies? © Gideon Mendel/Corbis

It's Glastonbury 2007, Sunday afternoon, it's raining. My wife and I watch a woman attempting to wheel a pushchair containing a small, screaming child through a field of mud that used to be the Pyramid Stage. The screaming child has mud on its legs. We leave early, missing The Who in the process. My girlfriend vows never to return. I vow never to have kids. We both vow, at the very least, never to combine the two.

Fast-forward three years and I'm still overjoyed to announce that my promise broke 13 months ago, while a second pledge is hanging by a thread. No, we haven't returned to - and I'm not writing this from - 'sunny' (wtf?) Glasto. We're off to Camp Bestival…

The very idea of taking a baby to a three-day outdoor music event goes against every grain of parenting sense I've picked up over my vast year of experience. Noise, mud and potential lack of nappy-changing facilities threaten to ruin what might well have been a pleasantly safe weekend at home.

But I'm representing the anti-safe: the die-hards not willing to let it all go until they're too old and decrepit to truly appreciate the festival experience, just because they've spawned a bundle of joy. And if you fall into that category too, we're exactly the reason that Camp Bestival exists.

If you've braved a festival with kids, let us know in the comments below. If not, I'll be back with a gallery of my own highs and lows, testing every 'family-friendly' claim to its limits. Now, I wonder if my little one will enjoy watching The Fall…