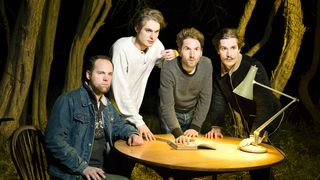 There aren't many bassists brave enough for that moustache

Most bands don't record themselves in tiny garages, horde mandolins or profess to have a serious interest in ornithology, but then there aren't many bands like Stornoway.

Coming to national attention when they became the first unsigned band to appear on Later With… Jools Holland in 2009, they subsequently signed to 4AD, releasing their debut album, the windswept Beachcomber's Windowsill, in 2010.

Establishing themselves as one of the more genuine, melodically adventurous indie-folk bands that the UK has produced of late, Stornoway are about to release Tales From Terra Firma, a confident, ambitious - and self-recorded - second album full of exotic instrumentation and broad-screen songwriting. MusicRadar caught up with bassist Oli Steadman to discuss the album and how the band produced it using the bare essentials…

Tales From Terra Firms has been a long time coming - why has it taken so long?

It's kind of due to the fact that we have this little garage. This garage is the space where we recorded the whole album, a little room in Oxford. I'm South African, so is my brother, the drummer, and my family moved over from South Africa about nine years ago. For the first six years, we had this garage at the back of the garden which was full of old papers and weird old instruments and artefacts from South Africa. It was full of this stuff gathering dust. A couple of years ago my family decided to turn it from this dusty old room into a studio for Stornoway. So the reason it's taken so long is that as of two years ago we had this studio at our disposal - a carpeted room basically, nothing fancy - but being able to sit in there for 12, 13 hours a day kind of tweaking melodies and seeing what happens meant that we could try every single melody we could, and over a year and a half we finally found the right ones. We're proud of what we've got, but it did take a long time.

So you tested every track to destruction?

Yeah, we did. On the previous album we kind of did the same thing, we were in bedrooms and kitchens and stuff. Then for the singles on the last album we had a lot of fun trying out the studio experience, where you hire a place and an engineer for a day. That was cool, but not quite the way for us, so instead we got this studio together. We spent a year and a half. Each song took a very long time, a month and a half.

What have you got in there?

It's a very simple place, we've got carpets on the walls - we got B&Q off-cuts. We have filled it with some really outlandish stuff. We used on the album some piano, a South African thumb piano, mandolins of different shapes. I've got some old wind instruments, I played clarinet on the album. There was lots of different percussion - bongos and spoons both make an appearance on the single. The reason was just that we had loads of time, so we tried every instrument.

Did the success of the last album free you up to take the time?

We were lucky enough that it sold well, and it saw us through the time. We had enough to buy food each day. But it has been full time 12 hours days for the last year. But we're really excited about this one coming out, and hopefully it'll see us through the next little bit until the next album.

Was there a feeling of pressure in following up the debut?

We've always been careful to keep to ourselves. There's a big music scene in Oxford, but we've not really felt like we're part of any particular part of it, we just do our own thing up on the hilltop in this little garage. Having that kind of set up, we don't really find ourselves being compared to other Oxford bands, so when we do see them, there is a bit of pressure. But we're quite isolated in the way we work, so the main factor in making this one was the truth in the songs and finding the different melodies to accompany them. I don't think we were affected by any pressure.

How did the songwriting process work for this album?

It's been a bit more of a group effort this time. Jon was responsible for a lot more of the original melodies and words. Occasionally a chorus will get through from the original demos. I've done a couple of tracks, one of them is going to be a b-side I think. We all have a go at it, but we've all got different writing styles. The main collaboration is in the arrangements. We've learned so much about production and the tech side of it this time, as we did it all ourselves. It's all on the same mic as we used for the first album as well.

What was the mic?

It's an old Taiwanese brand called XIX, or it's made in Taiwan anyway. It's an XIX Pure 1. We used it for all the vocals for the first album, and everything except one track on this one. I think it's the mic that Brian had when he first started recording on to a four-track tape machine. It saw us through our very first demos and the album. Either that mic best suits our voices, or I think maybe we've listened back and adapted our singing towards it. It just seemed that when we compared it with some other stuff that it sounded best to us, and we've got used to it.

What sort of production techniques were you using on this album?

It's the first time that we recorded to more than four tracks at once. Basically we had a sequence of Zoom multi-track hard disc recorders, that's all we ever used. When the 8 track ones started coming out in later years we started grabbing those. This one has been done entirely on the R16 Zoom desk, which is like £120 and has on board mics and stuff. It feels super lo-fi to us as we've had the studio experience, but we really prefer lo-fi, because you can take control and you can spend hours tinkering. I think the pre-amps are terrible when we took it to get mixed, we were told that we owed it to ourselves to buy a nice preamp, and we did end up borrowing a preamp. But the whole album has been made on a really tight budget, with a home-spun feel.

That's surprising, it sounds bigger and more expensive than Beachcomber's Windowsill if anything…

We did get a couple of people saying that they thought it sounded a lot slicker than the first album, and a bit of a departure from home-made, lo-fi feel. But the fact is we made it all on this small desk. We're perfectionists basically, so we're happy to spend the time getting the sounds right. Mic placement was important as well. The first track we did, The Bigger Picture, we spent three days positioning the mics. We spent an entire morning placing the kick drum mic so that without any post-production you could hear it as we wanted it.

So it was most important to get the room sounding good, with the mics positioned properly and instruments played with the right feel?

Yeah. The garage was used for most of it, and then for the two epic sort of tracks, The Ones we Hurt The Most and Farewell Appalacia, we actually went into a church as we wanted a more natural sounding reverb before any mixing or post production.

Where did you do that?

It's this church in Oxford called St Michaels On The North Gate, it's the oldest building in the city and part of the original walls and foundations and stuff. When you're tracking a vocal, you want to be able to have one headphone on and one off to stay in tune, and that open ear needs to hear the real atmosphere. It's all about getting the room right.

Can you talk us through the post production process?

Towards the end of the album we started plugging the R16 into Logic so it was more of an interface. We found that when you're on a hard disc, you haven't got a computer and a mouse at your fingertips so the comping is really tough. I convinced Brian and Jon to plug into logic, and that meant we were right into comping after tracking. We comped it and then sent the stems to our friend George Shilling. George used to mix bands like Blur, and he mixed Oasis and bands for Creation Records.

He's living in this little cottage in the countryside, where we would go for the day and explain to him what the rough guide mix we would like, what kind of vague ideas we had for panning and stuff. Then he'd use his compressors and EQs on it, make everything sound nice. Going to his place was really nice, as suddenly we were in a proper studio as opposed to our humble garage. He would mix it, send it back, and it would to and fro a little bit, and we would do that as we were going along. So The Bigger Picture was recorded in January 2011, then it was mixed by March and we'd be tracking the other tracks.

So you piled them up and when you got enough you were ready to go?

Yeah. It was really interesting having it mixed and getting that back to listen again. When we tracked we were entirely on headphones, we didn't really have anything like compressors or reverbs.

A lot of people who record at home tend to pour money into preamps and compressors, so it's interesting that you've gone about it completely the other way.

I'm starting to use that studio to produce bands EPs and stuff, and it's often bands who have been into studios and they're like "hey man, where are your preamps?" It's sometimes hard to convince other artists, but that's the way we grew up doing it, experimenting.