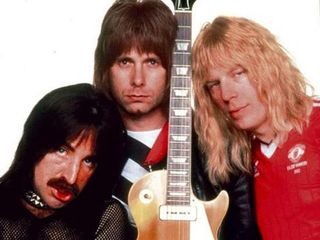 Smalls (played by Shearer) made the comments in a Guardian Unlimited blog, posted to commemorate the 25 years since This Is Spinal Tap was released.

As well as hinting at acoustic shows that would feature "Tap songs among other, less powerful, selections", Smalls reflected on the last quarter-century of the band's existence - including some of the mishaps that plagued their now-infamous American tour:

"Many nights on the road […] we found our way to the stage just fine, no problem. […] Next, when Tap played Royal Albert Hall in '93, the Stonehenge was too big to fit in the venue. So, it's hard to get these things exactly right."

The bassist also mused upon his ongoing problem with hearing loss:

Head to Guardian Unlimited to read the whole blog.