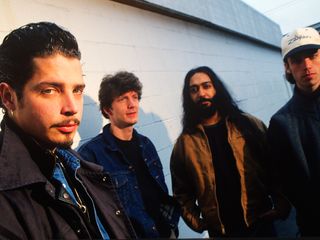 Soundgarden bassist Ben Shepherd is speaking out and hoping to clarify reports that he is 'homeless,' insisting that his current state of "couch surfing" doesn't compare to those faced with the true hardships of life on the streets.

In the interview with Spin magazine, Shepherd, when asked where was was living, said, "Nowhere. Literally. I've been sleeping on studio couches and at friends' houses. I'm totally broke."

Shepherd went on to detail his post-Soundgarden existence of the past 13 years, admitting that he became addicted to painkillers: "My whole life seemed over," he said. "Soundgarden broke up; my other band, Hater, broke up; my fiancée broke up with me; and then I broke three ribs. I got addicted to pain pills, drank a ton, and wound up OD'ing on morphine. I was laid out in my house for five days, and no one knew it."

Earlier this year, Soundgarden reunited and topped the bill at Lollapalooza several weeks ago. Regarding the interview that is the cover story of the current issue of Spin, Shepherd released the following statement on the official Soundgarden website, stressing that he feels his words could be "misinterpreted":

"I feel the banner saying that I am homeless was merely a sensationalizing stunt done by workers at SPIN magazine to sell their story, or make it seem more exciting than it actually is. It makes me feel embarrassed for the truly homeless people to be associated at all in any way with the likes of me. I seem to have been lucky, as most of you, in never having to survive day-to-day (on the streets) anyway.

"I in no way refute what was written in the article, I say what I mean with someone else's alphabet, so it is no wonder to me that my blathering can be so easily 'shined up' or misinterpreted to whatever purpose, especially to a stranger who has no idea of my horrible humor, or my delusional ideas. There I was thinking i was on top of the world, doing what I love and GET to do -- (music I mean) -- sure I've been couch surfing but that's a far cry from the plight of many many millions of good people worldwide.

"I just don't want our loyal and most badderasser fans to be mislead, or a bad light to be shone upon my family or friends who have helped me and tried to help me get along. It would be wholly unfair of me after all this to not stand up for them. Now feck auf, thanks."