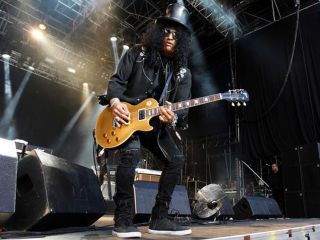 That Velvet Revolver are continuing their search for a lead singer might not exactly be news anymore. Nonetheless, Slash has issued an update this weekend concerning the situation, and he indicated that you might be hearing new music from him soon.

"I don't know how I'm supposed to wait until next year to put out this record!" the guitarist wrote in his MySpace blog. "It is so fucking cool and I am so anxious to get it out already. We start mixing soon and that will be that, ready to go."

Still, Slash intimated that should Velvet Revolver suddenly find their new frontperson, he might have to juggle his own solo touring plans

Slash tour could go thru next summer

"My VR bandmates and I had a meeting a couple of weeks ago and although the search for a singer will continue, I am going to tour on my solo record most likely thru next summer starting in March or April," he wrote.

"We (VR) will keep the word of mouth system goingand listening to submissions from singers and checking out different singer's sites, etc," he continued. "We know the right guy is out there somewhere. It's possible somebody could turn up before I do my tour and we could start working on new material sooner than later, in a perfect world."

As MusicRadar reported last month, Slash's solo album will feature contributions from a veritable Who's Who of the rock world, including Ozzy Osbourne, Fergie, Iggy Pop, Chris Cornell, Josh Freese, Flea - and there's even one big surprse on the record. No, make that two: former Guns N' Roses mates Steven Adler and Izzy Stradlin turn up.

"Steven is staying clean, which is great," said Slash. And as for Stradlin, Slash reported that "our guitars together really do have a sound all their own."

Whether fans will first be purchasing tickets to a Slash solo show or Velvet Revolver remains to be seen. In January of this year at the NAMM show, Duff McKagan indicated that a new singer for Velvet Revolver would be announced soon. That, obviously, didn't happen.

Then, last April, drummer Matt Sorum told MusicRadar, "We need the right guy in six months. We can't wait another year. Otherwise, it might not matter."

Whatever the case, Slash is ready to hit the road. "I have already started to put together ideas for a kickass band, and the plan is to perform some new stuff, Snakepit, VR and Guns stuff," he wrote in his blog. "The new album is really great and deserves that I should support it."