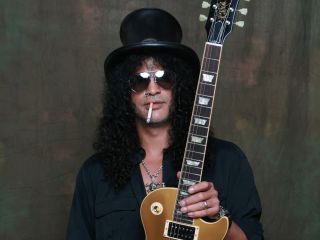 Slash shows off one of his new Gibson signature models

Hot on the heels of Gibson and Epiphone launching brand new Slash Les Paul Goldtops, MusicRadar caught up with the former Guns N' Roses and current Velvet Revolver guitar hero. In the following interview, Slash gives us the skinny on everything from his forthcoming solo album and new guitars to the ongoing search for a new Velvet Revolver singer. Without further ado, here's Slash...

You've played lots of Les Pauls and had several signature models over the years. How do the new models compare to those you've played in the past?

"That's actually a really good question. The quality - and I'm not just blowing smoke up Gibson's ass - in all honesty the quality of the guitars that the Gibson Custom Shop, Gibson USA and Epiphone are making is such that you can pick one up off the rack or out of the box and actually use it.

"And I say that because I started the last Velvet Revolver tour with one of my guitars I'd used for years, and at some point Gibson had made one of my signature Les Pauls. I received it, used it at soundcheck then stuck with it for the rest of the tour. I did very little to it besides changing the strings and it was great."

Do the new models have any features you wish that your Les Pauls had 20 years ago?

"Really when it comes down to it a Les Paul is a really simple instrument - even things like the TonePros bridge are basically an update on an old idea. We shave the neck to make it fit certain individual hand sizes - the particular type of neck that I like to use is a pretty thin neck, so we go for that. The new Goldtops have the custom tone controls too which don't get muddy if you roll them back."

Is the neck shape based on one particular guitar?

"It's not just one. I think what's happened over the years is I've played so many different Les Pauls, I've always had four, if not 10 Les Pauls out with me on the road, and I think the signature models are basically just accruing information that I've picked up over the years having played Les Pauls for so long.

"I've identified the different features that I really like, and so those particular necks are what I've gravitated towards with particulars guitars on the road, so it's basically just an accumulation of knowledge."

Have you ever been tempted to incorporate any crazier features into your signature instruments?

"Well personally all I'm doing is playing guitar. I don't go in for any pyrotechnics and I don't need any bells and whistles and I think the more you cut out of a guitar to make room for any sensationalistic amenities like that the more you take out of the guitar's original sound, and I try to keep it intact."

Do you modify any of your Les Pauls for slide playing?

"I actually tend not to play slide on Les Pauls, only because there's different guitars like Les Paul Juniors and Melody Makers that are really good for slide. That's not to say I won't pull a slide out and play slide on a Les Paul occasionally but if a song requires it the chances are I'll have a guitar set up accordingly."

How many guitars do you currently own?

"I've got somewhere between 80 and 90 guitars and I'd say 75 percent of them are Les Pauls. It seems ridiculous - but they all have a unique purpose."

Is there one that would you run through the flames and save if your house was burning down?

"Well, it would definitely be benefiting this particular promotion if I said one of my signature guitars - but in all honesty it would be the guitar I've been recording with ever since Appetite For Destruction. It's been my main 'go to' guitar for years.

"Having said that I have 80 or 90 guitars there are two that I keep close by with me at all times. Really you only need one or two guitars in your whole career. But you end up collecting a lot of guitars before you discover that reality."

So back to the house burning down, you can also save one record, and one other miscellaneous item, what are they?

"That's a tough one. I don't really have any what you'd call important miscellaneous items with the exception of my top hat I guess. But if it was a record then that's a tough call. Um…I'd probably say just a great, well-rounded rock record…Exile On Main Street. Plus it's a long-playing record."

Not Rocks by Aerosmith?

"You know, normally - that's one of my favourite records of all time, but it's one of those records that's sort of a little bit limited and you have to be in that mood."

You've tended to play predominantly sunburst Les Pauls over the years. Is there a particular favourite Goldtop that inspired the latest Epiphone and Gibson models?

"That's a good question because where this particular Goldtop comes from, in the nineties on the Use Your Illusion tour, I picked up a brand new Gibson Goldtop which became a major part of the set and I used it for all of the sort of epic ballads that had long sustaining guitar solos. Sweet Child O' Mine, November Rain, Estranged, Knocking On Heaven's Door, So Fine, and my guitar solo as well, so I did The Godfather with it.

"The tobacco sunburst and regular sunburst are very aggressive sounding guitars, so it wasn't necessarily as aggressive but it made up for it with this really nice, warm, round lead sound. For those songs I would take the tone and I would turn it all the way down for those really creamy, sustainy solos.

"And that particular guitar got stolen out of my recording studio in 1998, so I went to Gibson and asked if they could make me another one, modelled after that 1991 Goldtop, and that's basically what this one is. So the tone pots have particular significance."

Any guitar that could withstand the hardcore touring schedule of the Use Your Illusion days must be pretty tough.

"I think Gibsons are hands down the toughest guitars, I have to say. I smashed one once at a show in New Jersey a while back, and it took a couple of good, heavy whacks."

We've heard rumours about a Slash solo record. How is it going?

"I started writing on the road with Velvet Revolver and then when we finished the tour and I got back from the UK at the beginning of the summer I started to sift through the ideas I'd recorded and elaborating on them."

What do you use to record your demos?

"It's not real complicated, it's a 16-track Boss digital recording studio. It's really simple because I really can't stand to deal with anything complicated. At this point though I've got a friend who has a Pro Tools set up in his garage and he's been sort of engineering. I put down the basic ideas here at home, then go over there and sort of expand on that at his place. And that's basically the demo at that point."

Do you think your solo record will surprise people?

"I don't know if it will be so much surprising…I mean, it touches on a lot of different sounds. There's different singers for every song and I think it will be the choice of vocalists that surprises people the most. But you'll just have to wait and see who they are. I'm sure there will be huge rumours going around will be reported as if they are a matter of fact!"

On the subject of rumours, everyone from Sebastian Bach to Lenny Kravitz has been reported as being the new Velvet Revolver singer. Are you any closer to finding a permanent replacement for Scott Weiland?

"I mean, we haven't picked anybody, so until we actually pick somebody and find that guy….the first time around we auditioned so many singers - we weren't even called Velvet Revolver at the time - and then Scott became available. We sort of knew it was a pretty touch and go situation.

"Anyhow, this time around we've established ourselves as a proper band and we want to try different things - with Scott it was kind of limiting - so we are concentrating on just writing really cool stuff and waiting for the right guy."

You've worked with really great singers in the past, but on occasion they've perhaps been difficult to work with so finding someone really easy going would be a bonus too…

Fans recently voted for Axl Rose to be the new Velvet Revolver frontman on MusicRadar. Something tells us that this is unlikely to happen.

On a more light-hearted note, you are obviously famous for sporting a top hat - who are your favourite hard rock hat wearers?

"I always thought Stevie Ray Vaughan looked pretty cool in that cowboy hat. Lemmy always wears that same kind of hat too, it looks pretty good on him. I think that back in the day, Mick Jagger used to wear a couple of different hats that all seemed to be pretty cool for him. I don't know though, I never really singled out people who wore hats!

"It's funny though because before the top hat came around I was always on a quest for a hat - it's funny looking back at old pictures at some of the stupid hats I'd wear at any given gig. Then the top hat came and it just stuck, it's sort of like the Les Paul, you know, here's something that works. I always though Rick Nielsen's baseball cap was particularly cool for him."

Along with the top hat and the Les Paul, we've got used to seeing you photographed with a cigarette over the years. How are you coping with the smoking bans that have come into force in the various countries you visit?

Finally, there's a big fuss about the new Metallica record. Have you heard Death Magnetic and if so, what do you think?

"I've heard one song, which was great, but I haven't heard the whole record. It's worthy of a big fuss because everybody has been waiting for a new like, Metallica Metallica record for years so I'm excited to hear the whole thing and actually have a physical copy in my hand. I can't wait to put it on my car stereo and drive around at high speed."

It's definitely a record for driving fast to, even if that is a little dangerous…

"Metallica are meant to be dangerous."