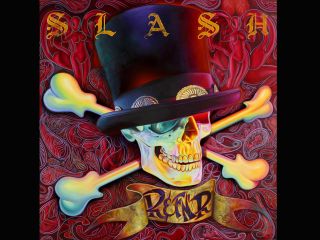 The cover art for the debut Slash solo LP

UPDATE: Read the track-by-track guide to Slash's debut solo album in his own words here!

PRESS RELEASE: In what will be his first true solo album, rock icon Slash announced today his album, 'Slash', will be released in the UK on 10 May 2010 through Roadrunner Records.

A major undertaking for Slash, he enlisted services of producing partner Eric Valentine (Queens Of The Stone Age, The All-American Rejects) and compiled a rhythm section of bassist Chris Chaney (Jane's Addiction) and drummer Josh Freese (Nine Inch Nails). Slash handled the majority of arranging and songwriting duties and hand-picked each guest artist. The album's guests worked collaboratively with Slash to round out the song.

"The idea was really simple in the beginning," said Slash. "These are all artists I wanted to work with - that I thought it would be amazing to do something creative and collaborative. And I was so impressed with what everyone brought to the table. They were all so committed to doing a good job. And we had a lot of fun making these songs."

In the UK, 'Slash' will also see Roadrunner Records enter into a unique and innovative association with a UK media partner - the special-interest media group, Future.

In a brand new concept in record distribution the standard album release will be preceded by a 'fan pack', in which the Roadrunner Records album will be bundled together with a highly-collectable special issue of Future Publishing's Classic Rock magazine dedicated to Slash's career.

The Slash 'Fan Pack' featuring his debut solo album from Roadrunner Records, along with a 132-page Classic Rock Presents: Slash special will have a cover price of £14.99 and will be available on magazine newsstands nationwide, in over 3000 non conventional music retail outlets such as WHSmith, all supermarket chains and many independent high street newsagents.

Slash is widely considered one of the greatest rock guitar players of all time. He has received countless accolades and awards including a 2007 star on the Hollywood Walk of Fame alongside his idols Jimmy Page and Jimi Hendrix.

An original member of iconic rock band Guns N' Roses, Slash helped the band create signature sounds like the guitar riff of #1 hit Sweet Child O' Mine and Welcome To The Jungle. The band dominated the 1980s and '90s music scene selling more than 100 million albums worldwide and ushered in a decade of hard charging rock music.

After the band's break-up, Slash went on to critical acclaim in his personal project Slash's Snakepit, and global success with supergroup Velvet Revolver. He has been widely sought after by the biggest musicians of all time, performing with everyone from Michael Jackson to Stevie Wonder to Ray Charles.

Slash is one of the marquee playable characters in Guitar Hero III, has two signature Gibson guitars in his name, and authored his own top-selling biography Slash in 2007.

Next page: the tracklisting and special guest details in full

"Slash" is released in the UK through Roadrunner Records on 10 May 2010.