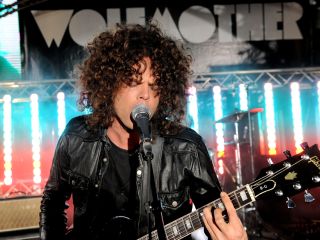 According to reports, Slash has one final track to record for his upcoming solo record, which will be released in early 2010 under the name of Slash & Friends.

"This song is really amazing," Slash wrote on his Twitter page - and we'll take him at his word.

Meanwhile, Slash has finished recording a song with Wolfmother guitarist and singer Andrew Stockdale, who provided vocals on an untitled track. Stockdale described the number as "relentless."

Asked how the collaboration with Slash came about, the Melbourne rocker said, "At the start of the year Slash contacted my manager and asked if I was interested in singing on his record. Maybe because I've got that old-school delivery it matches what he was trying to do."

Stockdale said it was "an honor" to work with Slash, whom he called "an iconic figure in rock 'n' roll history. Guns N' Roses in the '90s, they brought back in the danger in rock 'n' roll."

Wolfmother is set to release their latest album, Cosmic Egg, on 26 October.