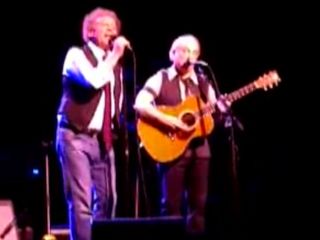 The famed duo of Paul Simon and Art Garfunkel reunited Friday night (13 February) at New York City's Beacon Theatre, the first concert at the venue after a seven-month, $16 million renovation.

Simon had already put on an eclectic, enthusiastically received 90-minute set when he said the magic words the audience longed to hear: "Ladies and gentlemen, my old friend Art Garfunkel."

The response from the crowd, which included everyone from Paul McCartney to Jon Bon Jovi to the Jonas Brothers, was deafening.

Simon & Garfunkel performed The Sound Of Silence (see video below), The Boxer and Old Friends, their legendary harmonies still gloriously intact. It was their third appearance together since a 2004 reunion tour.

"The fact that you still care is tremendous," Garfunkel said during the standing ovation that followed The Sound Of Silence.