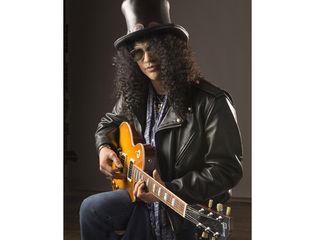 Slash: Send me some video love

We've heard of cool contests before, but this one has us thinking of busting out the video cameras ourselves -- a chance to win one of Slash's signature model Les Pauls.

Gibson is offering Slash fans a once-in-a-lifetime chance to win a Gibson Custom Shop Slash Signature Vintage Original Spec guitar, valued at $5,880.00 US list. It's called the "Gimme That Cool Slash Les Paul Gibson YouTube Guitar Video Contest." Fans are encouraged to make and submit an original, Slash-related video that lets Gibson and Slash know how much they love him, how bad they want to win a Slash signature Les Paul guitar, and why they deserve it more than anybody else. Videos should be uploaded onto YouTube and then submitted on the contest page of the Slash microsite.

Crafted of a solid mahogany body and maple top, and equipped with Slash's favorite Seymour Duncan Alnico II Pro humbuckers and a specially commissioned neck profile, Slash's three signature Les Paul guitar models are Gibson's tribute to the iconic guitarist and the guitars he has used exclusively throughout his incredible career. Each model is distinguished by details that Slash himself specified. The USA Slash Signature Les Paul Standard has an Antique Vintage Sunburst finish and Slash's skull and crossbones, top hat logo, and signature on the headstock, and the Custom Shop Slash Signature Vintage Original Spec guitar comes gently aged with a Heritage Cherry Sunburst finish that mimics Slash's favorite Les Paul as it was in 1988, the year he received it from Gibson. The Epiphone Slash Signature Plus Top guitar comes with a Dark Tobacco Burst finish and the new LockTone Stopbar/Tune-o-matic system, which adds 20 percent more sustain and secures the bridge and the tailpiece to the guitar even without strings.

Well, what are you waiting for? Get your creativity going and get that camera rolling. With any luck, you could be a YouTube star and win Slash's guitar in the process. And don't be surprised if we feature some of your videos ourselves.

For more on Slash's guitars, visit the official Gibson website.