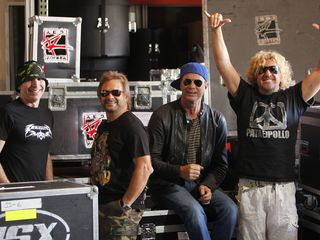 The second record is called Chickenfoot III, and it all makes perfect sense

"I'm very proud of the new album," says singer Sammy Hagar of the upcoming Chickenfoot III, which reunites him with guitar virutoso Joe Satriani, along with the illustrious rhythm section of Michael Anthony and Chad Smith. "We've established a real trust, Joe and I. We truly bring out the best in one another, and that spreads to the whole band."

As to why the record is called Chickenfoot III (after all, it is the group's sophmore outing), Hagar explains, "We're calling the album Chickenfoot III because it's so good, the songs are so tight, it's like we jumped right past having to make a second record."

Co-produced by the band and Mike Fraser (AC/DC, Metallica), Chickenfoot III is set for worldwide release on 27 September from eOne Music in North America and around the world by earMUSIC/Edel in a special 3D designed package. The album's lead single, Big Foot, will be issued 2 August.