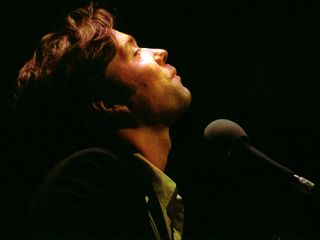 Rufus Wainwright channels the music of his childhood on the upcoming Out Of The Game. © Contographer/Corbis

One thing you can say for Rufus Wainwright: he's not in any danger of being pigeonholed. The eclectic singer-songwriter has cut a fascinating array of discs over the years, tackling everything from lush pop to opera to the music of Judy Garland.

A distinct, laid-back '70s vibe informs much of his new album, Out Of The Game, and Wainwright says that he and producer Mark Ronson, both lovers of Elton John, Harry Nilsson and Steely Dan, were on the same wavelength as to how the record should sound.

"We referenced the '70s somewhat," he says. "We were born in that decade, and so we both own it, but the way we went about it on this record wasn't deliberate. It was like we were digging into our primordial past by going back to that era."

Although Wainwright and Ronson were familiar with each other socially, it was their mutual publicist, Barbara Cherone (paid tribute to on the album's track, Barbara), who put the two together musically. "She has an affinity for great music and great looks - two things that Mark and I both own," Wainwright says with a laugh. "She put forth the idea that we might work together, and we picked up the deck of cards and ran with them. It turned out to be a very smart move."

With a discography that lists artists such as Amy Winehouse, Adele, Lilly Allen, Duran Duran and the Kaiser Chiefs, among others, Ronson has become one of the world's most sought-after producers. Wainwright admits that he didn't expect to nab the man who everybody wants: "I've chased hotshot producers before, and in most cases, it's hard to land them, especially when they've had big successes in the recent past.

"But Mark immediately wanted to work with me. He kept returning my calls, and kept getting in touch with me and saying, 'OK, when is this going to happen? It was nice to feel a real desire on his end."

Although Ronson is a highly talented multi-instrumentalist, Wainwright says that, aside from "guitar or bass here or there," the producer let other musicians - among them, Sean Lennon, Nick Zinner and the Dap-Kings - do the playing. Even so, Wainwright reveals that Ronson cut a full demo of all the songs on his own during pre-production - and that the recordings will eventually see the light of day.

"His demos were great. The whole album exists in a whole other format with Mark doing everything. It'll avail itself at some point."

As to what surprised him the most about recording with Ronson, Wainwright says that he was particularly struck by the producer's sense of humor in the studio. "Mark is hilarious, and so charming," he says. "Throughout the entire process, there was this steady level of fun that he maintained. I don't know... I totally fell in love with him."

Rufus Wainwright's Out Of The Game will be released on 23 April. MusicRadar will feature a full interview with Wainwright soon.