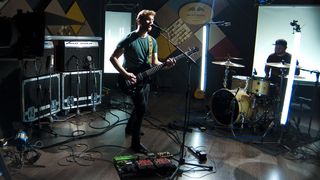 Royal Blood's dance card is filled for the foreseeable future - there's high-profile festival gigs all spring and summer, and come fall the band has the enviable opening slot on the Pixies' fall tour. Given that the group consists of only Mike Kerr on bass and vocals and Ben Thatcher on drums, they could play just about anywhere they want for as long as they like without going broke.

"That's the good thing about being a two piece," Kerr says. "Between buses or the odd plane trip here and there, hotels, we can tour much cheaper than other bands. So we've got that going for us - we're recession-proof."

The two piece from Brighton has more than easy finances on their side; they've also got a Godzilla-on-steroids-like live sound that is captured to a T on their recently released EP, Out Of The Black. The nuts and bolts of how the band constructs such sonic force is a closely guarded secret - we tried to arm wrestle Kerr into giving up the goods in the following interview, but the man held firm.

Things have happened pretty quickly for you guys. Are you surprised?

"Yeah, absolutely. It's pretty surprising to go from nobody knowing who we are to suddenly seeing that a lot of people are listening to our music. But I guess we feel as though we cut our teeth in previous bands. Ben and I have always played together, whether we're creating it ourselves or doing sessions. We even played a wedding together, believe it or not."

Did you start with three or four people and work your way down to two?

"Sort of. I've always been interested in experimenting with multiple amps. When I started playing bass, I always used two amps. I did that when I was playing keyboards, too. As time went on and different bands broke up, I kind of took that knowledge with me. I stumbled across this way of making a really huge bass sound, and I just thought it worked. How we wound up a duo was out of necessity, really: Ben and I couldn't find anybody else to join, so we just said, 'OK, let's leave it like this.' I never thought I'd wind up in a two-piece band, but I like the sound. It's worked out rather well."

That's a similar story to Local H's. But most rock duos are guitar and drums - why did you guys decide on bass and drums?

"Without giving away too many of my secrets and how I make my sound, I guess I found the bottom end more appealing. It was something that was a lot harder to replicate and make sound real - more than keys or guitars. In experimenting with things, I thought we sounded bigger with bass and drums. I just followed my ears, really."

Of course, being MusicRadar, we want you to give away your secrets. [Kerr laughs.] What kind of basses are you using? Do you hot rod them in any way?

"I use short-scale Gretsches. They're sort of very cheap models, one of their low-range basses. They're about £200 brand new, and they're made in China. By no means are they expensive instruments. Being smaller basses, they give me a lot more freedom to play them like I would a guitar. That suits my style.

"I didn't make any changes to the pickups at all. But I've recently started using a Fender Starcaster, a new bass that's come out. It's a hollow-body, short-scale bass with humbuckers that sound huge. I'm a big fan of that one, so I'm going to start using it a lot more. I'm sure the collection is going to increase and increase as time goes on."

How do you split your signal, and what kinds of amps do you go out to?

"I won't tell you anything about the pedalboard -"

[Laughs] "Sorry, man. The amps I use are all Ampegs. I use an SVT bass amp and two GVT guitar amps. I just found that they aren't making the GVTs anymore, so if you know anyone who's got some, let me know - I need some spares."

OK, you won't tell me what's in your pedalboard, but can you tell me if you put it together yourself?

"It's a mixture, really. They're some strange devices in it. The concept is pretty simple, but I spent so long figuring it out and because it's such a big part of a band, so I don't feel comfortable giving it away. It's too early on in our career. Also, I don't want to stress the point of the band being about just one sound. We're trying to write the best songs that we can, know what I mean? The details of the pedalboard I want to keep to myself."

I hear you. But there was a trial-and-error period in putting it together?

"Absolutely, and that's an ongoing thing. As time goes on, you find out different combinations of pedals and how they work. But you know, one thing I can talk about… I recently added guitar strings to my bass."

"Yeah, and that works great. Being that they're short-scale basses, you can fit most guitar strings on them. It's been quite interesting experimenting with two guitar strings and two bass strings, and playing a bit with bottleneck slide. You find new songs when you work with new sounds and combinations of things."

During certain songs on the EP, it sounds as if you're playing guitar. Did you overdub guitars at all?

"No, not at all. It's all bass. In fact, the album we're working on at the moment has no guitars, either. I think it's something we're going to stick with. The bass sound on the records is very true to what I do live. It's basically my rig and a bass at the end of it. There's a little double-tracking going on, but at no point is there an added layer - you're really only hearing one instrument. I don't like the idea of doing something we can't do live."

Do you write all the riffs on bass, or do you ever come up with parts on a guitar and transpose them?

"Piano is actually my first instrument, so I find myself bouncing around between piano, guitar and bass. It can be difficult and daunting to write on a bass alone, just the riffs, so I'll sit at the piano and come up with something, some sort of melody, and then I'll work it back to the bass. I think if I wrote riffs on just a bass, they might not be so interesting all the time."

Of the rock duos that we've had over the years, which ones influenced you the most?

"I'm really a fan of bigger bands, to be honest - Led Zeppelin, Queens Of The Stone Age. Two-piece bands didn't inspire us all that much. We always wanted to sound like a four piece, just with two people. A lot of duo want to explore minimalist and space, whereas we're just the opposite: We want to be huge and full sounding. I like the idea of playing as loud as possible."

So no referencing the White Stripes, the Black Keys, Local H… the Flat Duo Jets?

"Well, you know, I'm a big fan of a lot of those bands. Jack White and the Black Keys are incredible songwriters. The White Stripes are such an iconic two piece - nobody's really taken it as far as they did. I love their tones, but to me, it's kind of what they do. I don't want to replicate it. I'm very conscious of having a two piece that steers clear of what those guys have done. The comparisons still come in strong and hard, but I guess that's something we'll get for a while. There's not a lot to compare us to, which is why people point to numbers rather than style."

Royal Blood's EP Out Of The Black can be purchased on Amazon.