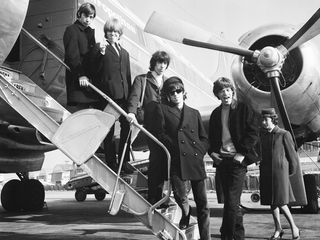 A veritable Rolling Stones film festival will be underway soon. Just today, we brought you the news of Crossfire Hurricane, a career-spanning look at the Stones that coincides with the band's 50th anniversary, and now comes word that the legendary, never-released documentary, Charlie Is My Darling - Ireland 1965, will have its premiere at the New York Film Festival.

Shot on a quick tour of Ireland just weeks after the Stones hit number one with (I Can't Get No), Charlie is my Darling - Ireland 1965 is the first documentary of the band, featuring professionally filmed concert performances and intimate, behind-the-scenes diary-like segments of the young Stones on the road.

Amongst Stones fans, Charlie Is My Darling has achieved mythic status over the years - the film surfaced only in bits and pieces and un-synched fragments. In the pic, the band is shown traveling through the Irish countryside by train; dashing from cabs to cramped, basement dressing rooms through screaming hordes of fans. Motel rooms host impromptu songwriting sessions and familiar classics are heard in their infancy.

Originally directed by Peter Whitehead and produced by Rolling Stones manager and producer Andrew Loog Oldham, the 2012 version, presented by ABKCO FIlms, has been meticulously restored with added, never-before-seen footage by director Mick Gochanour and producer Robin Klein, the Grammy-Award winning team that brought the classic The Rolling Stones Rock and Roll Circus to the screen.

Charlie Is My Darling - 1965 will premiere at The New York Film Festival on Saturday 29 September. A broadcast premiere will follow soon after, and the film will be available on DVD, Blu-ray and as a super deluxe box set on 6 November.