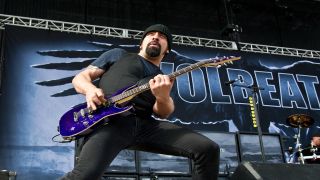 On January 4 2013 the rock world raised a collective eyebrow as Rob Caggiano announced he was leaving Anthrax, a band he had been a part of since 2001.

Exactly one month later the guitarist was installed as lead guitarist for Danish rockers Volbeat. It may have seemed a curious move at the time, but it's increasingly looking like a shrewd decision from the New Yorker.

Taking up producing and recording duties on new album Outlaw Gentlemen And Shady Ladies, Caggiano was able to explore new creative avenues with explosive results. The record topped the charts across Europe and hit the top 10 Stateside, proving that his decision to swap US thrash for Danish rock was a good one.

We chatted with Rob as the band geared up for an appearance at the festival with a fine tradition of all things Scandi-rock - Download festival...

How did you first become aware of Volbeat?

"I first became aware of these guys back in 2010 when my other band The Damned Things was taken on tour by Volbeat. I'd known the name for a while but I hadn't ever heard their music. I think it was the second shown in on that tour I stood side stage and I was blown away. I've been a fan ever since."

There must have been a personal, as well as musical, connection?

"Absolutely. I love the guys as people and we hit it off right from the beginning. They're Anthrax fans as well so there was this mutual respect already in place. It was very cool."

How did that progress as you began working with the band?

"Even back in 2010 over a few beers we flirted around with the idea of me one day working with the band as a producer. They were really into how the latest Anthrax record sounded and The Damned Things' record, and I produced both of those.

"We talked but my schedule has been so hectic for so long that it seemed like it was never going to happen. When I decided to move on from Anthrax, these guys caught wind of that and called me up. It was perfect timing because they were about to go into the studio."

You must have had a good time in the studio, because it wasn't long before you joined as full-time guitarist...

"We had a lot of fun in the studio. I think two weeks into the process was when they asked if I'd consider joining them as a band member on guitar. That changed my approach because I went from being the producer to being the guitar player as well.

"I ended up looking at things differently, like the guitar arrangements and how things were going to be recorded. On the album it's my guitar on the left speaker, Michael's on the right speaker, Anders is in the middle with drums everywhere. It's the sound of a band firing on all cylinders."

Was it a no-brainer decision to join the band?

"It caught me off guard. I told the guys I needed to think over night. I didn't expect it. For one I'm not Danish, I'm from New York City! When I really thought about it, it's the perfect situation. I love the music, I love the guys, it's killer all the way around."

Was there any hesitation? It seemed that you had taken time out to concentrate on production work, and here you were getting back into the album-touring cycle...

"A lot of people misinterpreted my press release. It was never about not wanting to tour and focusing on producing, it was more that I'd jump into the studio for a while until I figured out what I wanted to do.

"It was tough. It was an emotional decision for me to leave Anthrax. Those guys are my second family forever. I had no idea what was going to happen, I had no plan."

It sounds like leaving Anthrax was a difficult decision?

"It just got to the point where I felt I was spinning my wheels. It really boiled down to the fact that it was never a creative outlet for me. I never had an emotional connection to the music.

"We had an amazing run, I'm so proud of my time with Anthrax and it's amazing to part of that legacy. But it just got to the point that I needed a change. I needed to do something different. Those guys totally got it and we're all still friends."

As you came into Volbeat band during recording, were you able to put your stamp onto the material?

"My stamp is all over the record. When Michael first called to see if I wanted to work on the record we talked about his vision and he asked if I would play a couple of solos. I said, 'Of course, I love solos, it's what I do!' We started collaborating and there was a really cool creative chemistry there.

"The vibe was killer. As a guitar player it is really exciting for me because it is a chance for fans to hear a different side of me. I'm doing all kinds of stuff that I wasn't able to do in the framework of Anthrax.

"There's a lot of cool acoustic parts, overdubs and textures. It was a blast. "The sky's the limit" was the motto from the beginning. I hear The Misfits, Metallica, Elvis, all these cool things and it's stirred in the pot and spat out a different way."

Have you had to change your Anthrax rig to fit Volbeat?

"It's basically the same, there's just more of it! Volbeat is extremely loud on stage. Incredibly loud! I'm running more [Freyette 412] cabinets, I'm using Freyette Sig X heads. My pedal board is the same. It's the same set up, just more of it, and louder!"

And how about The Damned Things - can we expect a new album from that camp?

"I think we'll put another record out, it's just when and how. Fall Out Boy is back together and doing amazing, Anthrax I think are winding down, I don't know what Scott plans are and Keith Buckley, I'm not sure, I owe him a call! I haven't talk to him for a while. Everyone's schedules need to work together with that band but I think it'll happen at some point."

Has your production experience improved you as a guitarist?

"Absolutely. Every time I work with a new artist or band it is always a learning experience. You have to take something away every time you work on something or write or jam with someone.

"Everything I have done to this point has shaped who I am as a musician. I'm constantly learning and growing as a guitar player and as a producer. I'm extremely hands on, every time I work on a record. I love recording, it's magical."

Outlaw Gentlemen And Shady Ladies is out now.