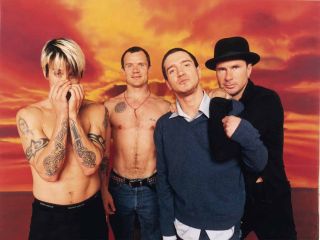 The Chili Peppers. No timetable, no agenda

When MusicRadar spoke to Red Hot Chili Peppers drummer Chad Smith last fall, he said the band was taking a year off, during which time he would pursue Chickenfoot, the 'supergroup' he's formed with Sammy Hagar, Joe Satriani and Michael Anthony.

But when we spoke to John Frusciante only last month, the eccentric guitarist stated firmly there were "no plans" for the Chili Peppers to reconvene. "We're on a hiatus of indefinite length," he said. "There's other things to life."

MusicRadar spoke to Smith again today. The amiable drummer clarified what was going on - and what wasn't - in the world of the Red Hot Chili Peppers.

"We've been on a break for a year and whatever," Smith said. "I can't speak for John - he's doing his thing and hopefully he's happy - but I think when we're all ready to play again, when we feel like it's time to be the Chili Peppers again, we'll do it."

Whether Frusciante is at the center of the band's extended hiatus, Chad won't say. "You can't force anybody to play who doesn't want to," he explained. "I'm not naming names. I'm just saying we all have to feel that the time is right to get it together."

Although Smith was at first under the impression that the Chili Peppers would be inactive for a year, he now says the added time has turned into a blessing. "A year off might have been optimistic," he said. "Maybe it'll be two years, maybe more, who knows? It's been a very positive time in our lives, actually

"The thing is, we'll only get back together for the right reason: to play music with one another. That's the only agenda this band adheres to."

As for the present, Frusciante has just released a new solo album, The Empyrean; Anthony Keidis is busy turning his life story into an HBO show; Flea has gone back to school to study music; and Smith is one happy clam as a member of Chickenfoot.

"Chickenfoot has turned out to be everything I could've hoped for," Smith enthused. "When people hear this album, they're not going to believe it's us; they're going to think it's four other guys. It's far exceeded my expectations and goals."

With the Chickenfoot debut album dropping in late spring and a major tour planned, Smith may find that "hiatus of indefinite length" growing ever longer.

"Hey, if I can be in two hit bands, like, wow, what a problem," he said with a laugh, "A drummer should be so lucky."