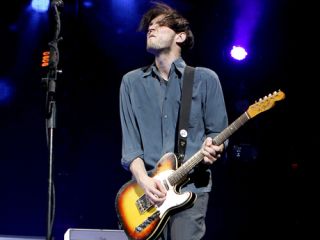 October of 2009 was a momentous month for guitarist Josh Klinghoffer. He turned 30, moved into a house and finished the debut record by his band, Dot Hacker. "I felt like I had really accomplished something," he says. Nine days after his birthday, he began writing songs with the Red Hot Chili Peppers, and when the announcement was made soon after that he was an official member, his life forever changed.

The only problem was, Dot Hacker, the quartet he formed with his friends Clint Walsh, Eric Gardner and Jonathan Hischke - all of whom boast serious credentials as touring or recording musicians with acts such as Gnarls Barkley, Charlotte Gainsbourg and Broken Bells - had to be put on hold. "It was just one of those things," Klinghoffer says. "That's how life is."

Two and a half years after its completion, Dot Hacker's maiden disc, Inhibition, is finally being released (1 May via Org Music). Klinghoffer acknowledges that his position as a Chili Pepper will bring the band the attention of millions of fans across the globe, but the good news is that this is no vanity project. The music, a captivating blend of adventurous soundscapes and transfixing rhythms, topped off with Klinghoffer's dreamy vocals, grows in scope and meaning with each listen.

MusicRadar sat down with Klinghoffer the other day to talk about the recording of Inhibition, the guitars and gear he used, his plans for the band and how he's adjusting to life with the Red Hot Chili Peppers.

Seeing as you formed Dot Hacker in 2008, is it safe to assume that you were planning to make it your full-time band before you joined the Chili Peppers?

"I was, actually. I had spent years touring with other bands as a sideman. That's how I spent my 20s. My dream was always to have a band with my friends, but it never seemed to happen - I kept getting offered great tours with incedible musicians. [laughs]

"So after tour upon tour, being in these amazing situations but basically being unhappy all the time, I felt like it was time to stop doing that, focus on writing songs and putting a band together fully. When I met Clint Walsh, who was in Gnarls Barkley with me, that's when we started plotting the band.

"Through Clint, I met Eric, and then I had known Jonathan the bass player previously. The four of us got on really well, musically and personally. I was gung-ho about making it my full-time thing, but economics played a part - everybody needs to make money. Just because I had made the decree of 'I'm not going to do it anymore!' didn't mean that everybody had to live by my rules.

"We started making the record, and then Clint went on tour with a really big French artist. We felt a bit splintered for a little while. And then Flea asked me to join the Chili Peppers."

So you had the unfortunate task of telling the guys, 'The good news is, I'm in a big band. The bad news is, Dot Hacker now have a weird schedule.'

"Yeah, but one of the guys had already left first. There was a little bit of an unspoken 'Fuck you, you left first!' kind of thing - in a really sweet, brotherly way. A lot of foolish blame being pushed around. Everybody wanted to do Dot Hacker, because it's a band formed of friends. But I love the Chili Peppers, I love the guys, and I'm so fortunate to be in this situation."

When Dot Hacker got together, which bands were tossed about as reference points?

"I always like to say that the music I'd like to make is somewhere between Pan Sonic and Scott Walker. But I don't sing anything like Scott Walker. [laughs] I like really sparse electronics, lush arrangements and interesting chord structures. We all listen to lots of different music.

"This could have gone nowhere. We could have made this record and it could have existed in our minds only. So I'm very glad to be putting the record out, and I have to thank the guys at Org for putting it out. It makes the band exist, even though we're not able to really pound the pavement right now.

"I think we can do good stuff. When we do another record, it'll feel like the next step. This album is three years old, and to me it feels like a band that wasn't able to spend as much time making it as we could."

The quality of your singing voice is quite striking. It's fragile and sort of ghostly sounding. Are you comfortable with fronting a band?

What was your writing and demoing process? Do your demos turn out to be the actual recording?

"I write a lot of stuff and do demos, play it for them, and then it gets changed. I'd say that a lot of the demos wound up being the record - certain songs. Some songs were from playing together, others were from demos. But we didn't do demoing and then recording. I'd like to do that - as a singer, the more you live with something, the more comfortable you are."

The song Discotheque is awash in electronics. What are you using on it?

"That's an 808 kick [Roland TR-808] and the synth is… I want to say it's a Nord Lead. It was probably some pad on the Nord Lead treated with a modular synth. The bass is a tag-team - I play the verse, and Jonathan plays the amazingly fast bit later on."

What were your go-to guitars for this record?

"I used my '67 Telecaster Custom that I have on tour with the Chili Peppers. That was John Frusciante's guitar and I sort of inherited it. I also used my Fender Starcaster, a newer Rickenbacker and my black '62 Jaguar."

The guitar distortion on Order/Disorder is very powerful. Do you like to use pedal effects, or do you prefer to overdrive your amps?

"I'm basically straight amp - the Silvertone is what I tracked with. Clint is probably using some effect on that song. I've been going through a conundrum with the Chili Peppers - I use overdrive and distortion pedals, and every time I go to clean I think, It sounds so much better! [laughs] Then when I try to get a jump in level or a jump in tone, I feel like it sucks down. I don't feel as though I've cracked the code yet."

The song Eye Opener is like a dream almost. What are you using for delays and reverbs?

"I probably had a [Electro-Harmonix] Holy Grail on, along with a Boss DD-3 and a Boss DM-2. I can't remember if it's on this song, but I liked to treat the guitars with an [Korg] MS-20 synthesizer. There's a lot of treated guitars, even if they're subtle."

The closing song, Puncture, is a soundscape masterpiece. Can the band play it live?

"Yeah, yeah. We got bold and opened with it when we played a couple of years ago. It's a lot of fun. Clint fills up a lot of space on the guitar live, but there's a lot of Hammond B-3 in there and a few other keyboard things. Every time we do it, it's different. I can't wait to play live again, and hopefully do more than one show in a week."

Given your Chili Peppers schedule, what kind of touring will Dot Hacker be able to do?

"The Chili Peppers have a real strict two-week on/two-week off policy - aside from me, everybody has families. So in theory, this band could hit the road in any of those breaks. We don't have plans yet. Everybody has little things here and there. But the first chance we get to do something, we will."

On stage with Flea in Cologne, Germany, 2011. © Oliver Berg/dpa/Corbis

Speaking of the Chili Peppers, do you still feel like the 'new guy' in the band? It's been a few years since you joined.

"I'll probably always feel like the new guy to a certain degree. But they've gone out of their way to make me feel - and I do - 100 percent part of the band. I never feel like I'm not listened to or not respected. But there will always be an aspect of 'What the fuck am I doing here?' [laughs]

"I think Chad probably still feels like he's the new guy sometimes. Because when you go up against a friendship and a connection that the other two have, it's hard not to recognize how much like brothers and a family they are. At the same time, they're very all-inclusive. I really do feel like this is a band. I can't wait to make more music with the Chili Peppers.

"Even with John coming back, they had 10-plus years of working together. For me to come in, even though I've been around them and have played with them, you can't make up for that time. You can't compare 10 years of history with a week - even though it was obvious, when I first played with them, that it could work and it would work. We all liked it and wanted to see where it could go."

What's been the biggest musical lesson you've learned from playing with the Chili Peppers?

"It's really been highlighted and accentuated… just being free and being yourself, not being fearful. Being on stage, I can trust myself more easily. Playing with guys like Flea and Chad, they just go for it. Just be me - that's the lesson I've learned.

"Like John Frusciante - I'll never be him. I can never be another person. I can only be me, and hopefully people will like it. I mean, I've been a fan of this band since I was 10 years old, so it's hard to sit and go, 'You're playing songs off of Blood Sugar…' But like I said, you just have to be yourself, play the song as yourself - that's what I'm reminded of every time I play with them."

Has there been a Chili Peppers song from their catalogue that you're still trying to nail? Not just like the record, but to your own standards.

"Yes, actually - the song Snow. It's funny, because I remember being in England right at the same time they were, too, and it was when Stadium came out. We hooked up, I was hanging out, and they were playing something for the BBC. They started playing the song and I was like, 'Fucking hell! No way am I ever going to be able to play that and sing that backup part. And thank God I will never have to!' [laughs]

"Cut to now, and we've been on tour for six months collectively, and you know, because that song was a hit, a couple of people, and one of our managers especially, were like, 'Where's that song?' And it's just because I feel like I haven't nailed it, not so much the guitar part but the guitar part and the background vocal at the same time - it feels so much like John.

"I guess I should be sitting in front of my stereo playing it 100 times a day. But you know, when it's ready, when it's natural, it'll happen. I've played it twice today already. I can play it, but there's that syncopated background vocal and the guitar at the same time. It still feels like an exercise. I just want it to feel natural. To make it good, I have to feel free."