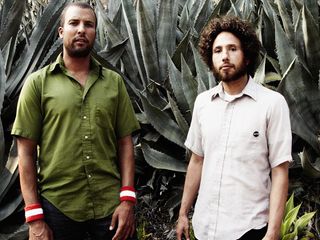 Rage Against The Machine meets The Mars Volta with synths!

Rage Against The Machine's Zach De La Rocha has formed a band with Jon Theodore, the former drummer of The Mars Volta.

The duo call themselves One Day As A Lion, and release a self-titled debut EP on 21 July. De La Rocha plays keyboard and sings in the band, while Theodore drums.

The duo have signed to Anti records, home to Tom Waits and Nick Cave, and in a statement said the band was "a defiant affirmation of the possibilities that exist in the space between kick and snare.

"It's a sonic reflection of the visceral tension between a picturesque fabricated cultural landscape, and the brutal socioeconomic realities it attempts to mask.

"The name is taken from the infamous 1970 black and white, captured by legendary Chicano photographer George Rodriguez featuring a center framed tag on a white wall in an unspecified section of Boyle Heights.

"It reads: 'It's better to live one day as a lion, than a thousand years as a lamb.' This record is a stripped down attempt to realize this sentiment in sound."

They add that One Day As A Lion "is both a warning delivered and a promise kept."

The tracklisting of the band's self-titled EP will be:
Wild International
Ocean View
Last Letter
If You Fear Dying
One Day As A Lion

De La Rocha's other band, Rage Against The Machine, play the T In The Park, Lollapalooza and Reading / Leeds festivals in coming months, while RATM's guitarist Tom Morello releases a new album under his Nightwatchman alter-ego in September.