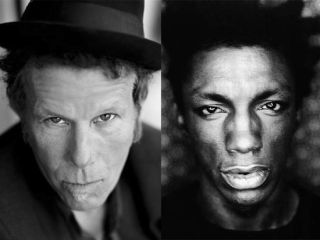 Tom Waits (left): “Not usually a fan of other people”

The matchmaking began with Island Records founder Chris Blackwell first contacting Waits with the proposal, before feeding back to Tricky: "We talked on the phone six months ago", Tricky told Teletext's Planet Sound. "Tom's not usually a fan of other people, but Chris said he likes me. Tom invited me to chill out with him in San Francisco, and when I've got time, I will".

"It's almost like me and Tom were fated to work together. I can't imagine what will come out of it, but I know it'd be a brand new type of music, different to him or me", he continued.

"I was compared to 'Tom Waits on acid' when I first came out. I didn't know his stuff then, but it led me to checking him out and I love it".

We recommend keeping an eye out for the upcoming "different" sounding album, because if the pair's previous work is anything to go by, a combination of the two is unlikely to grace the airways of Sunshine FM's Fun Hour any time soon.