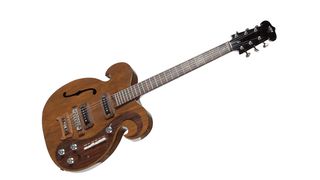 The 1966 Vox is expected to sell for somewhere in the region of $200,000 (Image credit: HANDOUT/Reuters/Corbis)

A rare custom Vox guitar played by both John Lennon and George Harrison is to be on display in London this week, prior to its auction in the US later this month.

The unique semi-acoustic Vox, which features ornate woodwork, extensive built-in electrics and scrolling cutaways, was custom built by Mike Bennet and Dick Denney in 1966 and went on to be used by The Beatles during the following year. The Beatles archives reveal Harrison played the guitar while filming Magical Mystery Tour, specificially in rehearsals for performing I Am The Walrus, while Lennon used the eye-catching Vox during rehearsals for the Hello, Goodbye video.

The guitar was eventually given to John Lennon's friend "Magic" Alex Mardas, the controversial head of Apple Electronics, and has a plaque on the back of the body that reads "To Magic Alex/Alexi thank you/ for been [sic] a friend/ 2-5-1967 John." Mardas claims that the date on the plaque refers to his 25th birthday earlier in the year, rather than the date he was given the guitar.

The Vox is to be sold in New York by Julien's Auctions on 18 May, and is expected to reach between $200,000 and $300,000. However, it will be on public display at The Stafford London Hotel, St James Place, SW1 from Thursday 9 May to Saturday 11 May, giving Beatlemaniacs a chance to see the guitar up close before it goes to auction.