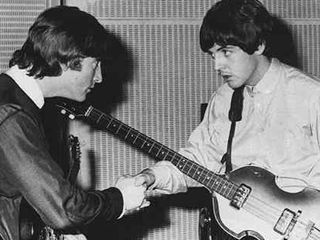 Another day, another classic

The interview was recorded in April1964 at the Scottish Television Studios for the show Roundup. It finds Lennon and McCartney discussing their songwriting partnership. "Sometimes we write them on old pianos or anything that's lying around, guitars and things. Normally we sit down and try and bash one out," explains McCartney. "Then again, there's no formula. He [Lennon] can come up with one completely finished, but we still say we both wrote it though."

Later in the interview, Lennon recalls meeting McCartney when the two were just teenagers. "I was playing at a garden fete in the village where I lived just outside Liverpool playing with a skiffle group," says Lennon. "And he came along and that's how we met."

The tape, in shockingly good condition considering the circumstances, is now stored safely in a temperature and humidity-controlled professional archive in Milton Keynes. BBC aired the nine-minute interview today. You can check out a small clip here. And if you want to listen to the entire tape, it is available here, provided you have Real Player installed on your computer.