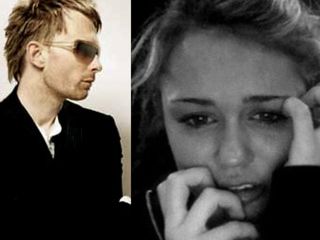 Recently, Cyrus made headlines when she lashed out at Radiohead after last month's Grammys. During the show, the young singer discovered that Thom Yorke and co were just doors from her dressing room. Calling them "the reason she loves music," Cyrus told her people to set up a meeting.

Unfortunately for Cyrus, she was told by Radiohead's peeps that "the band doesn't really do that."

This didn't sit well with Cyrus, who later went on a radio show and said, "Stinkin' Radiohead. I'm gonna ruin them. I'm gonna tell everyone."

As everybody knows, it's not nice to upset a teen star.

According to E! Online, Radiohead's publicist responded to Cyrus's remarks by saying, "When Miley grows up, she'll learn not to have such a sense of entitlement."

That might have been all she (or they) wrote, but over the weekend Thom Yorke, in a thinly veiled message to Cyrus, posted on Radiohead's Dead Air Space blog: "Wish us all a safe journey if you still like us and you're not one of those people i have managed to offend by doing nothing xx."