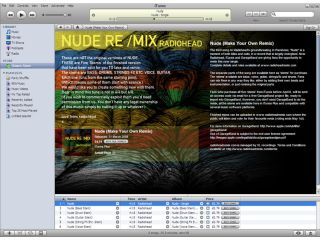 The stem files for Nude are available on iTunes right now.

Lifted from the acclaimed In Rainbows album, Nude is the new single from Radiohead. If you´re not satisfied with the original arrangement, though, don´t worry: the band are giving you the chance to create your own version.

If you go to the iTunes Music Store you´ll find that the stem files for Nude (ie, its component audio files) can now be purchased. Bass, drum, guitar, string FX and voice stems are available, with each one costing the same as a single iTunes song (the exact price depends on your region).

If you buy all the stems before April 8 you´ll be sent a code that gives you access to a GarageBand project file of Nude (this will also open in Logic), but because the stems are DRM-free AAC files, you can use them in other software, too. What´s more, it seems to be the case that the audio in the project file is uncompressed.

Once you´ve finished your remix, you can upload it to the dedicated Radiohead Remix website, where the Top 10 remixes can be listened to. The rankings are based on the votes of the public (voting ends on May 1) and Radiohead have said that they´ll listen to the best remixes. You can even download a widget that enables votes placed on your website or Facebook or MySpace page to be counted.

Radiohead are by no means the first band to offer up their tracks for public remixing - Nine Inch Nails recently set up their own remix website and several other acts have gone down this road in the past - but the Oxford five-piece are certainly the biggest names to do so thus far and the Apple link-up is sure to give the venture a high profile.

There´s a certain irony, of course, in the fact that Radiohead have reportedly refused to put their back catalogue on iTunes on the basis that they don´t want their albums to be available as individual tracks, but are now going a step further than that and splitting up a song completely. It´s also interesting to note that some people will end up paying more for the stems for Nude than they did for the whole of In Rainbows.

One thing that should be remembered is that you won´t have any legal ownership of any Nude remix you create; if you want to put it out commercially, you´ll need to get Radiohead´s permission. That said, this remains a great opportunity for budding remixers to make a name for themselves - the top 10 tracks are sure to receive massive exposure.