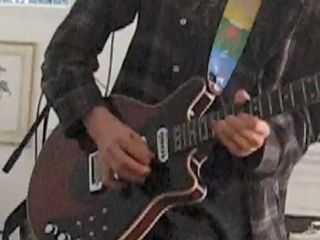 Does this playing give you a sheer heart attack?

Recently, we took a look at some of the vocalist entries, and one clear-cut Freddie Mercury emerged: Marc Martel. The guy's got it all. Chops, spirit, even the moustache - the dude's Freddie! Even Marc's stand-in will have his work cut out for him (or her - women are open to apply, as well).

Now it's time to assess the guitarists, which we'll do in a number of installments. Much in the way that Freddie Mercury was a one-of-a-kind singer, the same can be said for Brian May as a guitarist. Using his home-built "Red Special" guitar, his unique playing style and tone informed the Queen sound. For anyone hoping to join a Queen tribute band, especially one sanctioned by the group, Brian May's shoes are mighty big ones to fill.

Here's nine guitarists who think they can rock you. The question is...do they?

Tristan is sonically accurate in his interpretation of the main lead lines from Killer Queen. He's tasteful, and his phrasing is assured. He gets extra points for playing to the camera. If he grew his hair out more, he'd make a convincing Brian May.

Whoa! Brian's really crankin' the volume. Not only that, but his tone is a wee bit thin. A little bass and mid-range could help him out. He adds some of the answer-back lines that Tristan didn't play, but Brian's overall technique, while impressive, lacks a kind of magic.

Give it up for Daryle, who apparently could be any one of the Queen members - he implies as much - but seeing as the contest states that you can enter only once per instrument, he's going with the guitar. Unfortunately, he's got the distortion maxed out, making much of his playing sound washy - and it totally drowns out his background vocals. His leads are solid and serviceable.

Timothy's a double-threat talent. In the beginning, he plays Brian May's guitar parts with studied adequacy, but mostly this clip is a vocal audition - and towards the end he forgets to play the guitar altogether. Or perhaps he chooses not to. He's got skills - he just needs to figure out what he wants to be.

Playing a Les Paul Jr. southpaw, he does a nice job of things, but his performance is a stilted. There's a joy that came through in Brian May's playing that is lacking in Robert's "professional" audition.

Anthony is definitely feeling it. He closes his eyes and air sings with palpable emotion. Pity he didn't hook up a mic so we could hear his real vocal chops.

His guitar sound is crunching but overpowering. He could work on that vibrato some. His touch is hard, whereas Brian May always had a sweet, soft technique. For the most part, though, Anthony's in the ballpark.

Chuck is a solid player, and he does a decent job of approximating Brian May's licks. But his tone and phrasing don't hit the marks. There's an emotional disconnect happening here.

From the start it looks as if he's missing some key guitar lines. He's got a nice Brian May guitar, so we'll add points for visual presentation. His take on the main solo is clean and well executed…except for a few bonked notes. Clearly, Brian Clemons is determined, and he's got youth on his side. He could be someone to watch.

Despite a few rushed moves - no doubt due to nerves - Richie comes the closest to channeling the spirit of Brian May on the guitar. His tone is impeccable and he never misses a trick. More importantly, he plays with soul, strutting along, coaxing every comical squeak and squeal from the fretboard. There's an ease and grace to his playing that feels very May-like. Good stuff!