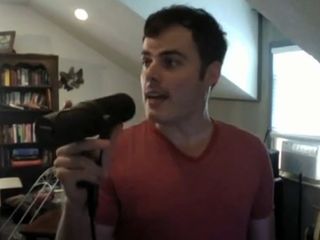 Is Marc Martel the new Freddie Mercury? Millions seems to think so

Last week, Queen, led by drummer Roger Taylor, announced that they were forming their very own Queen tribute band to be called, shockingly enough, The Queen Extravaganza, and that the public - more specifically, North American residents - was free to submit entries.

In less than seven days, the online contest - a search for "shit hot vocalists and musicians" - has captured a fairly sizable chunk of the world's imagination. The plan is to recruit three vocalists (wait...didn't Queen have one frontperson?) and four musicians (wait...didn't Queen have three? Oh, right, Freddie played keyboards on some songs) to hit the road in what is called the 2012 Queen Extravaganza Live Tour.

While we're pondering how KISS didn't think of this shrewd idea first, let's take a look at a few of the Freddie Mercury wannabes. In future installments, we'll size up the potential Brian Mays, Roger Taylors and John Deacons.

Give Kyle credit for going with the underdog song. His take on this early Queen chestnut is both spirited and...interesting. He may not be channeling Freddie (and he does go off-key at times), but he's got his own thing going on.

Props to Victor for choosing The Seven Seas Of Rhye, as well. But the props are immediately removed because of, well, the singing.

JLM wants to break free. We have no problem letting him go wherever he wants, as long as it's not near a stage.

With close to three million views on YouTube in less than a week, Marc Martel would qualify for a sensation in anyone's book. But the fact is, this Canadian singer with the "dirty stache" has Freddie Mercury down to a T.

Clinton says he loves to sing, and he does an impassioned version of Somebody To Love. His major stumbling blocks? Well, he doesn't look or sound like Freddie Mercury. Other than that...

Jose makes a case that Freddie Mercury was from Zanzibar, so the fact that he's from Brazil shouldn't be a big deal. True, but neither is part of North America - and the rules clearly state that all contestants must reside in either the US or Canada. Beyond that, Jose's "daring" audition is pretty tame, as in boring. Jose, write this down: Freddie Mercury wasn't boring.

Jackie says that she's not trying to be "too, too seriously" about her entry, but you wouldn't know it from the heart and soul she puts into I Want To Break Free. Whatever her Freddie shortcomings may be, if thinly disguised desire counted, Jackie would be in the running.

Next to Marc Martel, Sean comes the closest (thus far) to hitting all the Freddie Mercury marks. He's a bit tentative, but perhaps on a stage he might cut loose. The wink at the end is a nice touch. Hey - confidence helps.