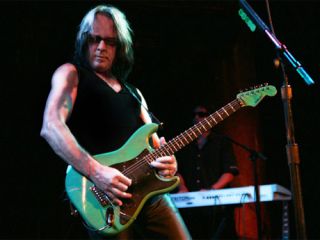 As well as touring with the likes of Ringo Starr's All-Starr Band, producing just about every rock staple from New York Dolls to Meat Loaf and being name-dropped and sampled by today's geeky hipsters Simian Mobile Disco and Hot Chip, Todd Rundgren's solo records remain among his most celebrated works. None so more than 1973's seminal A Wizard, A True Star.

As Rundgren prepares to bring his prog opus in its entirety to London's Hammersmith Apollo on 6 February, we caught up with him about what it takes to recreate a classic on stage.

Have you played the whole of the album live before?

TR: "I've never attempted to do the whole thing, although I had done segments of it with backing tapes. But it was never an option to do the entire record until now. The genesis for this idea came from a promoter who had noticed the record was getting a lot of name checks from younger artists, most noticeably Hot Chip, but it seemed it was generally getting discovered by a much wider and younger audience."

"The London show was gonna be the first time we did it, but word got through to my American fans and we thought it wouldn't be right to make them go all the way to England for the premier. So we did about 10 days worth of shows in the US last September, which was probably a good thing."

"If I'd had to mount the show for the first time in a town in another country that I wasn't so familiar with, I might not have had the support mechanism in place that I would have in America."

Did the US run help iron out any problems you might have had? The whole undertaking seems quite a challenge.

TR: "Well, it was a challenge, but that was fairly soluble by making sure I had the right group of musicians. I had to get the right band around me, but we also had the advantage of technological evolutions over the last 30 years or so."

"There was no way I could have played the whole record live around the time it first came out. There are so many sounds that would have been difficult to reproduce back in the day."

Can you give any specific examples of that?

TR: "Not really, because I kind of cheated along the way. We have samplers nowadays, so it was easy for me to go back to the original master tape and lift any sound I wanted off it. We did that a bit, here and there, but not too extensively. We were able to get fairly close to most of the instruments without recourse to that."

"In some cases there are sounds or treatments to instruments where we no longer have access to the original devices, but I don't what to give too much away. I don't want to dissect what we've done before the London audience has a chance to hear it."

Next: recruiting the band and "anti-conceptual and neo-Dadaism"

How did you recruit the band for these shows?

TR: "I think one of my most astute decisions was to get Greg Hawkes from The Cars to play a lot of the synthesizer parts, because he actually owns a lot of the same instruments I used in the studio back in 1973. I don't have them any more, I parted company with most of them over the years, but Greg is more than capable of reproducing most of the peculiar noises!"

"It was also great to get Kasim Sulton on bass and Prairie Prince on drums, because although they weren't on the record it kind of gives the fans a little Utopia reunion, a little added bonus. We've also got Ralph Schuckett on keyboards, which is a nice link to the original record."

You've said in the past that you don't like the record being described as a concept album. Why is that?

TR: "The concept of the album was actually anti-conceptual, a kind of neo-Dadaism. There weren't supposed to be a lot of standard rules, and if there were you were free to break them. There was a method to the madness, in a way. I'd made Something/Anything? the year before and had got three hit singles from it, but I didn't want to be an artist who'd found a formula for success and just carried on mining it."

"I was already making more money as a producer. It was never in my mind to build myself and comfortable and commercial base, to become a household name. Critics were starting to refer to me as the male Carole King, and as much as I love Carole King I didn't want to be marginalised in such a way."

Rundgren in the kitchen, 1983 © Lynn Goldsmith/Corbis

"Aside from that, I was just thinking differently about the possibilities of the studio and what habits I'd developed as a songwriter - and if it was possible for me to escape those habits. The studio shouldn't be a place where you go to just record your songs, it should be approached as a musical instrument itself and you owe it to yourself to explore the possibilities it holds."

"To continue recording standard songs would have been like filling in a form. There's more to life than a verse-chorus-verse-chorus-bridge-chorus about a relationship that went bad. I'd done that, it was time to do something different."

Next: something for the "hardcore fans"

Have you been to see other artists recreating complex albums, such as Brian Wilson with Pet Sounds or Smile, or The Zombies with Odessey And Oracle?

TR: "I didn't catch any of the Wilson shows, but I saw The Zombies not long ago and it struck me as being a little lounge-y. It maybe wasn't altogether their fault, because they were playing in a casino and I think a lot of the audience just wanted some background music while they ate their dinner."

"I'm not sure those kind of shows are meant for anyone but hardcore fans, so it was kind of a waste of their expertise. Everyone was sat still in their seats for the whole thing. You come and see me and I'll get you on your feet right at the start and keep you there!"