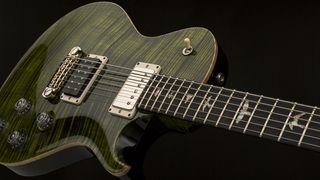 Alter Bridge, Creed and Tremonti guitar behemoth Mark Tremonti is a long, longtime PRS user, and this year marks another addition to his well-stocked arsenal of signature guitars, the Limited Edition Tremonti Baritone.

Based on Mark's regular signature PRS, the baritone comes tuned to C# [C#, F#, B, E, G#, C#] and offers a few tweaks, including a longer 25.5" scale length, with a non-wound G string to allow for lead and rhythm playing.

Mmm. PRS isn't limiting the number of Tremonti Baritones it will make, but if you want one, you'd better act fast: the company is only taking orders between 6 October and 20 December 2016.