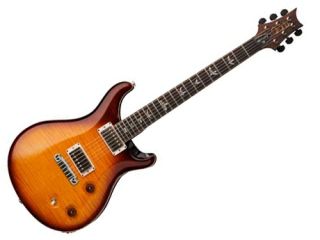 PRESS RELEASE: PRS Guitars' new McCarty 58 pays homage to the legendary guitar maker Ted McCarty and the life-changing impression he made on Paul Reed Smith as a mentor.

A vintage inspired double-cutaway body and a figured maple artist-grade top with PRS's new "V12" finish compliment the unique sound of the proprietary 57/08(tm) pickups. This is the latest installment in a series of McCarty models created by PRS consisting of the McCarty, Ted McCarty SC and DC 245, McCarty II, McCarty Korina, and now, the McCarty 58.

"If we could venture a guess of what PRS would have made in 1958, this would have been it," commented Paul Reed Smith.