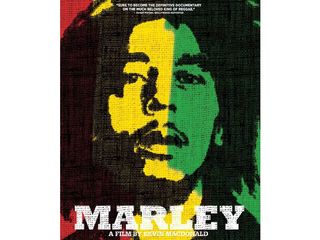 More than 30 years after his death, Bob Marley remains one of the most charismatic figures the music world has ever produced, and one of the few whose impact stretches beyond the songs he recorded. Not just a reggae superstar, he was an ambassador for Jamaica who involved himself in the nation's politics.

All aspects of the man are examined in Marley, director Kevin Macdonald's two-and-a-half documentary made with the full co-operation of the singer's family - but this is no sanitised, rose-tinted hagiography, and amid the plaudits for his music and activism, a portrait looms of an all too human and fallible figure.

On the personal front, Macdonald throws the spotlight on the young Marley, brought up in poverty with no strong father figure, his mixed race raising questions of identity. It was this upbringing, the film suggests, that spurred Bob onwards to make his mark in the world, the burgeoning Black Power message of his music adopted from his love of '60s US soul.

His own shortcomings as a husband and father are highlighted (widow Rita talks frankly about Marley's many affairs), and the director skilfully weaves the contradictions together - a beloved figurehead adored by millions who, at times, struggled to connect with the people closest to him.

Out of his youthful social rebellion, Marley honed his enduring message of "one love", aided by an innate sense of melody that arguably softened the more primal roots of reggae and made it palatable for a global (and white) audience. But although his most celebrated songs are today the staple diet of "smooth" oldies radio stations, the radical stance and articulacy of his protest music, Redemption Song in particular, marked him out as a chronicler of the times as intelligently persuasive as Bob Dylan.

Macdonald unearths some eye-opening archive, but is perhaps surprisingly frugal when it comes concert footage, presumably aware that the familiarity of the music means it need not be reiterated too heavily. Instead, the songs are largely used as cues to introduce anecdotes and incidents from his life, with friends and collaborators such as Bunny Wailer, Lee 'Scratch' Perry and Studio One janitor Dudley Sibley sharing their own memories.

The overriding image, however, is of an artist who used music as a unifying force, who was determined not to waste his voice once he'd persuaded the world to listen to him.

"I feel that that one of the reasons Bob has lived on is because he speaks to the oppressed people of the world," the director says. "But more than anything else, he speaks to people in the developing world who feel like they've been given a bum deal, who feel like they've been hopped over by the west or whatever. Here's a voice telling them, 'Your turn will come. You're down now but you're going to get up there.'"

Marley opens in cinemas across the UK today (20 April).